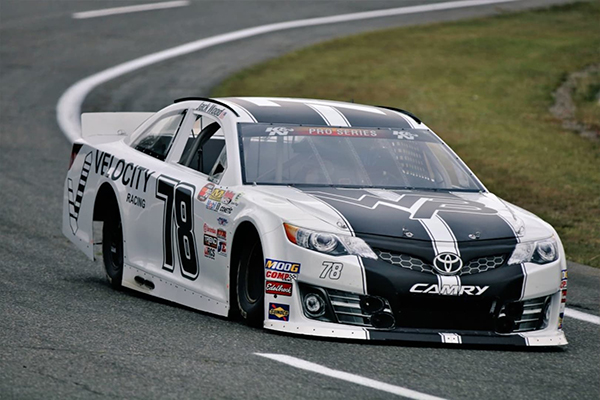 LOOMIS, Calif. (February 17, 2020) – 19 year-old Jack Wood continues a busy start to 2020, Thursday, when he climbs aboard the Velocity Racing #78 Toyota in the ARCA Menards Series, West opener at the Bullring at Las Vegas Motor Speedway. The Star Nursery 150 will start the ARCA era on the west coast and mark Wood’s seventh start in the series.

The Loomis, Calif.-based driver is also scheduled to compete in his ARCA Menards Series national debut at Phoenix in March, the ARCA Menards Series, West race at Irwindale, and the SPEARS SRL Southwest Tour Winter Showdown at Kern County Raceway Park. His remaining schedule is still being finalized.

Wood’s efforts will be led by veteran crew chief Ty Joiner, with the pairing already earning dividends in the prestigious All-Star Showdown at Irwindale Speedway earlier this month. Wood finished a career-best third, scoring the FLUIDYNE High Performance “Cool Move of the Race” award as well.

Wood has added another ally to his program with NASCAR XFINITY veteran and Bakersfield native Ryan Reed serving as his driver coach.

“I’m super fortunate to have these opportunities. Irwindale was good for my confidence because we were able to run with the best racers on the West Coast,” Wood said.

Thursday’s event will be the first time the West Series has raced on the 3/8ths mile Vegas oval since 2012, but Wood has three starts at the venue in the SPEARS SRL Southwest Tour.

“I really think we have a shot to win. I think we can show up with some good speed,” Wood said. “We spent all of the offseason working on the cars and getting ready for this year.”

Wood’s schedule in March includes the one-mile Phoenix, half-mile Kern County, and half-mile Irwindale, tracks he believes suit his driving style. He qualified four times within the top-ten out of six ARCA West starts in 2019, all at venues a half-mile or larger. He ended the season qualifying eighth and finishing eleventh at Phoenix in November.

Action gets underway for the Star Nursery 150 on Wednesday with practices at 5:00 p.m. and 7:30 p.m. An additional practice will be held on Thursday at 1:00 p.m. before time trials at 5:00 p.m. The Star Nursery 150 will roar to the green flag at 8:00 p.m. Coverage of the event is available live on TrackPass on NBC Sports Gold, or available on a tape delay basis on NBCSN.