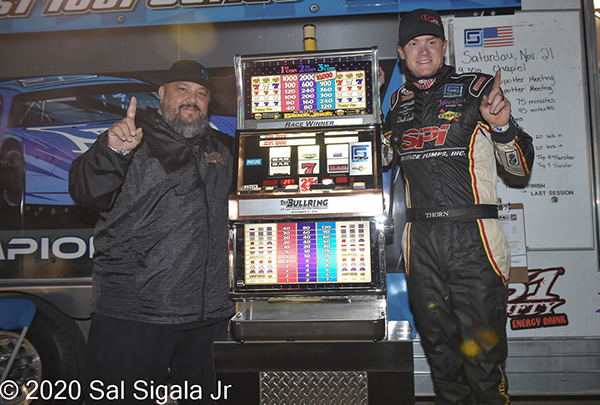 (November 22, 2020 by Kevin Peters) – Derek Thorn had been looking for a customized Retro Custom Metals designed trophy for half a dozen years. In 2019, he finally got that trophy, in this same event. Saturday night, at the Bullring at Las Vegas Motor Speedway, Thorn got his second one, in dominating fashion. Thorn led all but three laps, to take home over $10,000, in the “Retro Custom Metals 137”. Thorn bested a series record 42 car field for his record 48th career victory and seventh of the season in the SPEARS SRL Southwest Tour Series. In doing so, he clinched a record-breaking championship, his fifth in the series. Photo by Sal Sigala, Jr.

“It’s cool to have Homie (David Mulcahy) be a part of this series and do what he does every year”, Thorn began. “This Vegas race is special because of him. He puts the money up and he always brings these awesome trophies. He put a lot of time and effort into those things to make them as cool as they are. To have a guy like that supporting the series like that…..class act, it’s awesome to have that.”

Thorn continued, “To be at Vegas, to have a car that good….I’m blessed to have owners like Byron Campbell, Carol Campbell and to have (Crew Chief) Mike (Keen) do what he does, to make these things so fast, I’m really just the guy behind the wheel trying not to mess up. At the end of the day, we are just trying to get our notebook as big as possible for the (Snowball) Derby, which is the biggest one at the end of the year, even though we have one more in the SRL, but that’s the next one, so it is our focus. We are hoping to go back there and be competitive, see what we got, and hopefully be towards the front.”

In a record-breaking event, it was only appropriate to have a record-breaking qualifying session. Three drivers broke Thorn’s Track Record of 14.149 seconds. Tyler Fabozzi, Derek Thorn and SRL Rookie-of-the-Year Contender Brandon Farrington all bettered the mark, but it was Farrington at the end of the day setting the “PFC Brakes Zero Drag Fast Time Award” at 14.090 on the 3/8-mile track. The teams in the top eight redrew for position, and the suddenly lucky Derek Thorn, drew the number “1” card for the second race in a row. Tyler Fabozzi drew the number “2”, followed by Trevor Cristiani, Blaine Rocha, Tayler Riddle, Farrington, Dylan Lupton and Eric Schmidt. Preston Peltier and John Dillon just missed the redraw, with Dillon tenth, 0.005 seconds out of the redraw position.

At the start, Thorn jumped to the lead in the highly favored lower groove, with Fabozzi settling into the second position. A caution on lap two slowed the event with Jace Hansen climbing the back-stretch wall. He was towed to the pits in an incident that also ended Andy Allen’s day. The ensuing restart resulted in the same scenario, with Fabozzi dropping back into second. But the 2019 Rookie-of-the-Year fought back in Turn 3, getting under Thorn, and emerging with the lead on lap three. Another yellow on lap five found John Dillon turned around, after contact with Preston Peltier. Peltier was sent to the rear, and Cole Williams pitted with a flat tire.

On the restart, the field settled down. Thorn had a great restart and retook the lead with an outside power move. Brandon Farrington began to flex his muscle and moved to third, getting under Cristiani and Rocha by lap 15. The top-five remained consistent over the next 50 laps, with Thorn leading Fabozzi, Farrington, Lupton and Cappello, with Cappello pressuring Lupton over most of those. The halftime break came on lap 68, with Cappello finally clearing Lupton just before the break for fourth.

The teams could make changes to their cars at the intermission, but with no tire changes. As per usual, Mike Keen dialed Thorn’s Campbell Motorsports entry in, with the restart finding Thorn shooting to the front. Lap 70 found Farrington to the inside of Fabozzi, with Fabozzi now trapped in the outer line, falling all the way back to eighth. From there, he could not recover to the top-five. The yellow flew for the last time on lap 73, when Dylan Lupton found himself in the spin cycle, as a result of an inside move and contact by Cappello.

The restart line-up found Northwest star Owen Riddle up to the third position and in prime position to move to second. Restating on the outside of Thorn didn’t pay off for Farrington as expected, as Riddle took advantage and moved to the inside of Farrington, shuffling the rookie back to fifth, with Cappello to third and Cristiani to fourth. The field took off on a long green flag run with Cappello eventually getting under Riddle for second on lap 106. Farrington began his march back to the front, getting by Cristiani and then moving by Riddle on lap 118. Rocha also turned up the wick, moving to fifth and then clearing Riddle for fourth on lap 133.

The checked fell on lap 137, giving Thorn his 48th career SRL victory and clinching his fifth championship, with one event to go. For Thorn it has been a dream season, losing only to Linny White at Kern County Raceway. Although the win looked easy, Thorn knew that he had defeated a strong field and was pleased to see the participation from the Northwest portion of the country, as he mentioned.

“It’s cool to see guys like that come down from the Northwest”, Thorn explained. “The West Coast, as a whole, is really spread out, so you don’t get a lot of the guys from the Northwest able to come down. It’s like the guys from the Midwest running the “Derby”. It’s a long drive, inconvenient, and hard to do. So, my hats off to the guys, who came down to run with us. They are good, it’s just the West Coast never gets the credit, as far as having really good competition. To have those guys come down here is really great!”

Dylan Cappello was making only his second SPEARS SRL Southwest Tour Series start, and had a much more productive day than his first attempt in this same event last season, as he explained his effort.

“We started on the outside line and it was a struggled to get down”, Cappello stated. “We got a couple of lucky starts there, when Peltier and a couple of other guys got bottled up, and we were able to sneak by and grab some positions. For the most part we were just really good, and we could cut the center better than some of the other guys, get under them and drag race them down the back straight away. That’s where I made most of the passes. This was only my second tour race, so I was trying my best to save (my tires). I didn’t know how much I needed to save to run with Thorn, and I just didn’t save enough. I blew the right front off there at the end.”

Cappello was driving a Super Late Model for SRL regular Scott Sanchez. It was the first time the two had teamed up and the pairing was certainly a success. Cappello was grateful for the effort and the support he received.

Brandon Farrington continued his improvement over the season, in his Sigma Performance Services (SPS) / TMI Motorsports Super Late Model. He backed up his fourth-place effort at Kern County with a career best SRL finish of third. Like many teams, he was cognizant of the track conditions, and tried to minimize their restarts in the outside line.

“We had a little bit of strategy going for us, before the halfway break”, Farrington recalled. “We were sitting in third, and provided we didn’t have any pressure from behind, we weren’t going to try to put on any pressure. We were just trying to save the car, because it is a long race. At the halfway break, we got to restart third and kinda moved up from there. We had that restart late in the race and got shuffled back to fifth or sixth and that was tough, but we were able to get back to third with a good finish.”

A long-time racer at the Bullring was one of the reasons for the team’s success, as Farrington described.

“The car was a rocket ship all weekend. My Crew Chief, Dustin Ash, has a lot of laps here and he knows the place really well. Experience is an important thing at a place like this. Him coaching me, and getting me all tuned up with running the right line makes a big difference. It’s not possible without all the guys with Sigma Engineering, SPS, Wells Johnson, and the whole crew that comes out and busts their butts for us the last two days. I know it’s not easy, but we appreciate the heck out of them.”