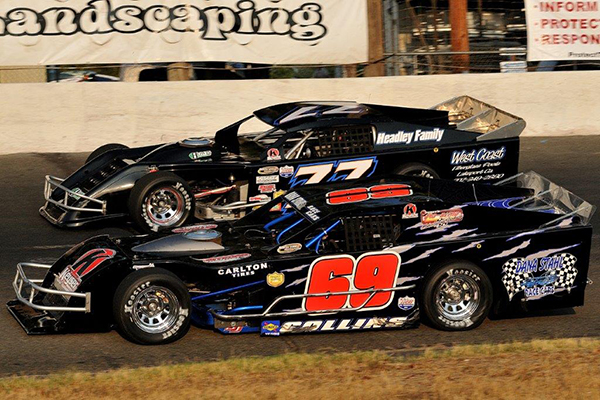 (September 14, 2020 from Lakeport Speedway) – The North State Modified Series, presented by Protect the Harvest, returned to Lakeport Speedway Saturday night for the second time in 2020, and when it was all done Charlie Collins of Upper Lake blew away his competition in the last 15 laps to win $2000 in the Napa Lake Parts Fall Special. Collins was followed across the finish line by Ukiah’s Kyle Tellstrom (July’s winner) and defending NSMS champion Scott Winters of Tracy. Photo by Jenna Meyer.

The beautifully prepared race track was blistering fast with the current Hoosier tire track record of 12.578 seconds set by Tellstrom in July broken four times during qualifying. Tellstrom holds the new record at 12.414. The other three drivers running under the old record were Winters (12.437), Jeremy Nowlin (12.513) and Collins (12.544.)

Tellstrom drew the number 6 pill for the line-up inversion for the 60 lap feature, putting local drivers Darrin Sullivan and Ian Elliott in the first row. Collins and Nowlin shared the second row, and Winters and Tellstrom started in row three.

Sullivan forged ahead at the start, and when Elliott tucked in behind Sullivan, the side-by-side battle was on between Collins and Nowlin. Winters and Tellstrom also ran next to each other as Sullivan was pulling away.

The race was yellow-flagged on lap 10 when Noel McCormack made contract with Richard Knight causing Knight to spin in turn two. Nowlin beat Elliott to the line the previous lap setting up a Sullivan-Nowlin restart.

Sullivan shot out in front again, and just when it seemed Nowlin was losing ground on the high side, his car hooked up and he took over the lead on lap 17. Tellstrom also chose the outside groove and passed Sullivan for second the following go-round.

The race was slowed again on lap 21 when Elliott and three-time NSMS champion Darrin Knight hooked their cars together and crashed on the front stretch. Elliott’s car was towed to the infield and Knight limped to the pits.

For the next 10 circuits Braund and Winters swapped places back and forth, and on lap 42 Mike Sullivan snuck under DeRoiser for 6th. Nowlin was riding tight on Tellstrom’s bumper, but luck was not on Nowlin’s side as on lap 45 he lost a radiator hose, slid up the track in his own water and climbed the turn four concrete. Nowlin was uninjured, but his car suffered major damage.

Tellstrom chose the outside lane for the restart, but his car did not hook up the same and Collins took over the lead. Collins pulled away from the pack, turning the fastest lap in the race to earn the Competition Carburetion Fast Lap Award of $50. Winters drove back by Braund in the closing laps, and at the Sunoco Racing Fuel checkered flag it was Collins, Tellstrom, Winters, Braund, Darrin Sullivan, Mike Sullivan, DeRosier, Chris Salmina and Richard Knight.

Cody Braund won the Naake Suspension Hard Charger award for passing the most cars. Jeremy Nowlin was the recipient of the Mark and Sharon Hoosier Tire award. The Scribner jugs went to DeRosier and Keith Bloom. Unfortunately Bloom later lost a transmission and was unable to start the feature.

North State Modified Series heads North to Redwood Acres Raceway in Eureka for their next event on September 26. The McMurray and Sons Roofing 60 will also pay $2000 to win. Then the following week will by the Lloyd Burton Against the Wind Modified Challenge at Shasta Speedway on October 3. The final race of the series will be the Bob Lehman Classic at Stockton 99 Speedway on October 14.