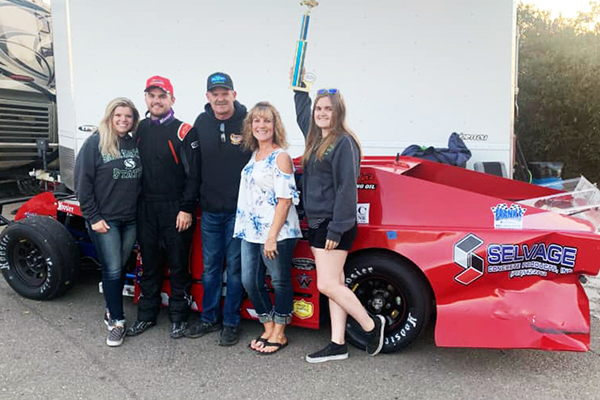 (October 25, 2020 by Nadine Strauss) – The 2020 grand finale’ for the North State Modified Series (NSMS), presented by Protect the Harvest, was held at Stockton 99 Speedway Saturday with 21 cars and drivers on hand to compete in the inaugural Bob Lehman Classic. The event saw five lead changes in 60 laps, but it was Cameron Austin of Santa Rosa who led the final 20 to win the event and collect the $3200 first place prize. Darrin Sullivan of Kelseyville, who led the most laps (29) finished second. And Kyle Tellstrom of Ukiah clinched the 2020 NSMS championship by finishing third.

No time trials were scheduled for this event so the 60 lap feature lineup was based on the fastest laps turned in two pre-race practice sessions. Defending champion Scott Winters of Tracy turned the quickest lap of the day (14.125) and drew the number 10 pill for the inversion. Nick Lyons was tenth quick and would have started on the pole, but his brakes failed in hot laps and he drove hard into the turn four concrete wall and was unable to make the show.

So Jarred Hess and Rich Lindgren shared the front row with Cody Braund and Mike Sullivan in row two, Darrin Sullivan and Ian Elliott in row three, Darrin Knight and Austin in row four, and Tellstrom and Winters in row five.

Lindgren powered into the lead at the drop of the green flag with Hess settling into second. Both Darrin Sullivan and Knight made the inside groove work and snuck under Hess on lap five. Darrin Sullivan continued his inside challenge and took the lead away from Lindgren on the tenth circuit. Knight drove by Lindgren the following round and the two leaders pulled away from the pack.

Five laps later Braund’s car started to smoke. When his oil filter blew off it spilled oil all around the track, and when Elliott spun in the oil, the red flag came out.

After a lengthy clean-up the race restarted with Knight and Darrin Sullivan in a heated side-by-side battle for the lead. The two make contact but kept going, and at the same time Chris Lyon and Robert Schmidt crashed together ending their runs.

When racing resumed Darrin Sullivan continued to lead with Knight second. Austin passed Lindgren as both Tellstrom and Winters were using the low side to gain ground. Austin caught Knight and took a look under, but could not make the pass stick. Meanwhile Tellstrom and Winters were rubbing fenders and when the two cars came together on the backstretch on lap 25, Winters spun to bring out the next caution. Both Winters and Tellstrom had to restart at the back of the field.

Two more yellows were thrown when Mike Sullivan spun in turn four, and Lindgren and Elliott made contact on the back-stretch.

Once again Darrin Sullivan shot out in front on the restart, but this time Austin drove under Knight into second. At the half way mark it was Darrin Sullivan, Austin, Knight, Winters, Keith Bloom, Lindgren, Tellstrom, Dustin DeRosier, Chris Salmina, and Hess.

The leaders continued to battle with Austin peeking under Sullivan while Winters was challenging Knight. Winters assumed the third spot on lap 33 and continued his forward charge. Meanwhile Tellstrom drove by Bloom and set his sights on the leaders.

Austin moved under Darrin Sullivan on lap 37 and the pair drove side-by-side for four laps before Austin took control. Winters followed Austin’s line into second and the challenge was on. Winters tagged Austin’s car, moving Austin up the track and he drove by to take the lead. But then Winter’s car slowed down and he lost 3 laps when he pitted for a tire change.

In the closing laps Sal Lopez spun to slow the action, Rick Avila dropped out and Lindgren spun in turn two. With only five laps to go Knight’s car overheated ending his run. Austin drove the final rounds to capture his second NSMS race of 2020. Darrin Sullivan had his season-best finish with second place, and Tellstrom finished third. Keith Bloom was fourth with Mike Sullivan rebounding to finish fifth. Rounding out the top ten were Brian Collins, Lindgren, DeRosier, Salmina and Winters.

Bloom won $100 in the Lucas Oil Dash for Cash and Salmina finished a $50 second. Austin was named the Naake Suspension Hard Charger. The top 15 in points received the Lucas Oil Tow Money.