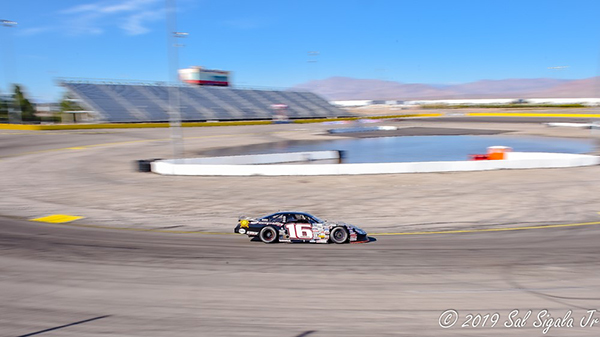 (October 8, 2020 from SRL PR) – The 20th season for the SPEARS Southwest Tour Series received a “shot in the arm” from long-time series sponsor, Retro Custom Metals. When the series heads to The Bullring at LVMS for penultimate race for the 2020 season, the top SLM drivers on the West Coast will be competing for a $10,000 payday. Photo by Sal Sigala, Jr.

In a year where sponsorship support has been so crucial in keeping the wheels turning for one of the premier Super Late Model touring divisions in the country, the contribution of Retro Custom Metals of the Las Vegas event is just another great example of companies stepping up to help.

“Homie (Retro Custom Metals Owner, David Mulcahy), is a great supporter and friend of the series. Year in and year out, he always asks ‘how he can help the series grow and make it better.’ We can’t thank him enough for all he does and we’re looking forward to seeing a great field of Super Late Models battling it out for $10K on November 21st at The Bullring.” Olsen concluded.

The “Retro Custom Metals 137” will be Round #8 of the 2020 SPEARS Southwest Tour Series season. Also, in action at The Bullring at LVMS on November 21st, will be the Spears Manufacturing Modified Series for their next to last race for the 2020 season. Friday practice will be followed by Saturday afternoon racing.

For more information, go to www.SRLSouthwestTour.com.

About SPEARS MANUFACTURING: Spears Manufacturing is a world leader in plastic pipe products. SPEARS’ maintains over one million square feet of manufacturing facilities in four states and nine distribution centers across the USA for worldwide distribution. For more information go to http://www.spearsmfg.com.