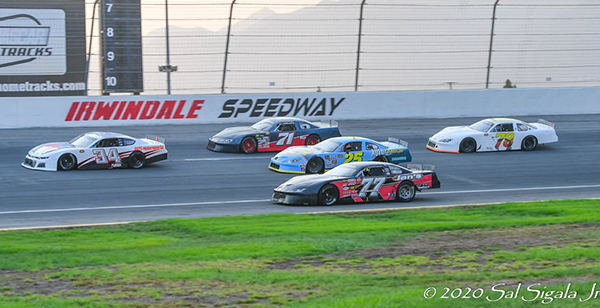 (October 8, 2020) – It’s no secret that Irwindale Speedway has had one of the most tumultuous tenures of any short track in California, with numerous roadblocks from conception to its current program. The half-mile speedway hosts racing for the NASCAR Advance Auto Parts Weekly Series but also is a hot bed of activity throughout the rest of the complex. Photo by Sal Sigala, Jr.

Under the tutelage of Tim Huddleston, Irwindale has faced the same significant pandemic challenge as many tracks in California – no fans allowed in the grandstands. But as his son Trevor Huddleston explained to us, Irwindale has found secure financial footing through its other activities.

“It’s definitely affected us for sure. It has obviously affected the whole world. I really just got to give props out to my family and everyone who is a part of making Irwindale possible,” Huddleston said.

Irwindale is active nearly every day whether its racing at the NHRA-sanctioned one-eighth mile drag strip, its YouRaceLA driving school, or the numerous television, movie, and advertising productions that take place at the speedway.

“What’s pretty cool about the whole thing is they’ve found different avenues and different ways to keep the track running. They’ve thought outside the box and made stuff happen.”

Trevor Huddleston is having a busy season across the west coast including five top-fives in the ARCA Menards Series West and grabbing the $10,000 to win Short Track Shootout at Madera Speedway. The four-time NASCAR California State Champion feels confident in the future prospects for his home racetrack.

“They’re doing an absolutely awesome (job). Definitely don’t fear that Irwindale is going anywhere. We’re going to be racing NASCAR there for a long time.”

Irwindale’s remaining 2020 slate includes NASCAR-sanctioned races on October 10th and October 17th as track points leader Dean Thompson continues to battle for the state championship in the Division 1 Late Models. A marquee event will see the SPEARS SRL Southwest Tour compete on December 19th, joined by Pro Late Models on the one-third mile oval. At least seven events at the drag strip are scheduled before the year concludes as well.