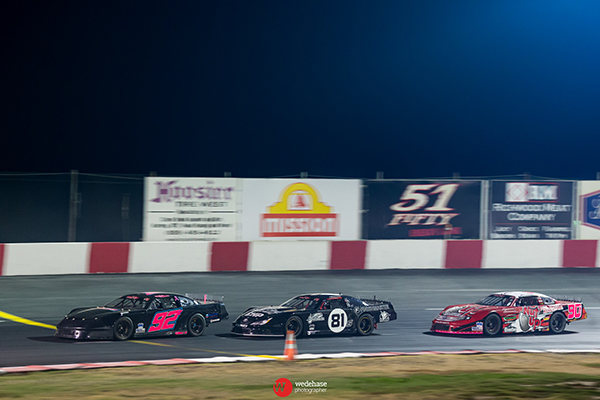 MADERA, CALIF. (September 2, 2020) – The $5,000 to win, 100-lap second round of the Race 2B Drug Free Big3 presented by 51FIFTY invades Madera Speedway this Saturday. It serves as the sixth round for the MAVTV-televised Nut Up Pro Late Model Series. Paired with a $3,000 to win B-Main and a tremendous lineup of lucrative bonus awards, Saturday’s event looks to be the largest so far of the 2020 season. 51FIFTY Jr. Late Models and the Mini Cups vs. Bandoleros will also be in action. Photo by Jason Wedehase

The 100-lap race will be staged over a pair of 50-lap segments. The B-Main will transfer the top-four finishers and is scheduled for 25-laps.

Grandstands remain closed due to COVID-19 industry guidance, but Madera Speedway, Mission Foods, and Nut Up Industries will provide a free live stream. Race fans can tune in to Short Track TV on YouTube at 6pm Pacific for the coverage at https://youtu.be/jIQ3ZEKQeSc

The Race 2B Drug Free Big3 includes multiple bonuses for driver performance. Drivers in the Big3 will be competing for a special point fund with $5,000 for the champion, $2,500 for second, and $1,000 for third.

2019 Short Track Shootout winner and 2020 Idaho 208 winner Jeremy Doss of Upper Lake, Calif. won the opener for the Big3 on July 25th. His victory came ahead of 2020 Nut Up Pro Late Model points leader Buddy Shepherd of Bakersfield, who has enjoyed three victories this season along with a pair of runner-up finishes. Shepherd has also set fast-time on three occasions, but Doss holds the track record honors with a sizzling 14.832 second lap around the one-third mile in July.

The goal of the Race 2B Drug Free Big3 Series is to bring awareness to programs designed to help those fighting addiction and to promote the stories of people that have fought their way out of addiction.

Quickly moving up the series championship order is Dylan Zampa of Napa after winning on August 22nd. Shepherd, Ross Strmiska, 2007 Altamont champion Ryan Philpott, Blaine Rocha, and Zampa make up the top-five in the Nut Up Pro Late Model standings.

Speaking of the 51FIFTY Jr. Late Models, their 70-lap race this weekend is full of intrigue as Ukiah’s Cole Brown looks to challenge points leader Bradley Erickson. 14-year-old Erickson – of Phoenix, Ariz. – won both round three and round four before Brown led 44 laps en route to the round five triumph. Kercie Jung of Bakersfield is third in the standings ahead of Jake Bollman and Seth Wise.

The drivers ages 10-16 years old compete over a 40-lap opening segment, followed by the Mission Racing Style Tortilla Chips halfway break. After adjustments and MAVTV-interviews, the drivers battle for a 30-lap run to the finish.

Madera Speedway’s youngest drivers in the Mini Cups vs. Bandoleros have spent the season following Jeffrey Erickson and Rebecca Dubie. Erickson had to use a backup engine on August 22nd, yet still drove to victory for his fifth win of the season. He leads Bakersfield’s Caden Cordova and Oakley’s Joey Kennealy in the points battle.

Rebecca Dubie of Tracy had won the first four Mini Cup trophies, in the race within a race, before Harley Kennealy grabbed her second career win in the last event. Dubie has a seven-point advantage heading into Saturday’s 30-lap main event.

Activities get underway on Friday with practice. Pit gates open at 2:30pm with the track open from 5pm to 9:00pm (high side only from 8-9:00pm).

On Saturday, pit gates open at 11:30am with practice beginning at 1:30pm. Qualifying will be at 3:00pm with the Mini Cup and Bandolero heat races to follow. The $3000 to win, 25-lap Pro Late Model B-Main is scheduled for 4:45pm. Opening ceremonies and live streaming coverage will begin at approx. 5:50pm.