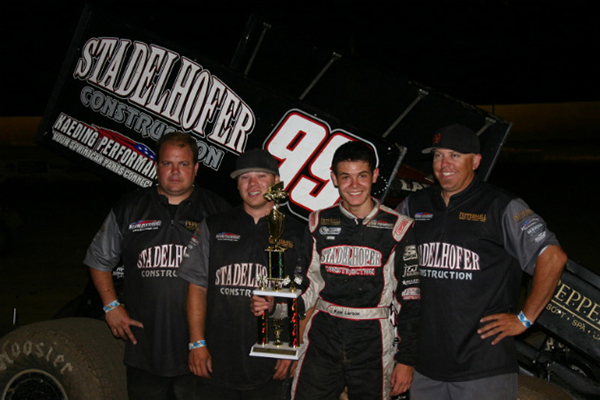 (August 28, 2020) – With the overwhelming success of Kyle Larson this summer across the nation’s dirt tracks, we wanted to reach back into our vault to see how his meteoric rise began. In August of 2010, Larson found himself challenging for both the Golden State Challenge Series – now NARC/KWS 410 – championship and the Ocean Sprints presented by Taco Bravo championship. The success led to his eventual opportunities in USAC in 2011, his NASCAR K&N Pro Series, East title in 2012, and the rest is history.

The Heir Apparent to the Kaeding Throne (August 4, 2010) by Steven Blakesley

Second in the points standings in the Ocean Sprints.

This could be an article about Brent, Bud, or Tim Kaeding. Or maybe even about Jon Allard and the Zero Heroes. But this is a story about 18 year-old Kyle Larson of Elk Grove, Calif. Larson is on his way to becoming not only the youngest King of California champion, but the heir to the Kaeding throne. Even more fitting, Larson is accomplishing these amazing feats behind the wheel of a car from the Kaeding stable.

In the 2010 season, Larson has piloted the #99 Stadelhofer Construction / Kaeding Performance entry to eight main event wins. He has also added a pair of Outlaw Kart wins and a 600 Micro Sprint victory to give him 11 total victories thus far. He had an average finish of 2.8 and five victories in July alone.

Larson climbed the racing ladder through Outlaw Karts, California Sprint Car Civil War, and into the King of California for 2010. Larson has over 130 wins in an Outlaw Kart and he most recently celebrated his birthday on Saturday by winning the Open Division main in a kart at Cycleland Speedway.

“An Outlaw Kart at Cycleland Speedway really teaches you how to race,” Larson said. “Cycleland is slick in the middle and has room to throw sliders, which really helps in learning how to make decisions in a race car. The power-to-weight ratio is also just like a 360 Sprint Car.”

Larson’s accomplishments have grabbed the attention of some major players in the racing world. Gary Thomas, who handles public relations for both the Ocean Sprints and Golden State Challenge Series, puts Larson in pretty high company.

“Kyle is right up there with the best and I don’t think I’ve seen a kid that young with so much talent in my time going to the sprint car races,” Thomas said. “There’s been a lot of great young talents but Kyle has always stood out to me.”

Larson will have a break from his busy winged schedule in the middle of August and has signed with JJ Yeley’s Triple Crown Racing. He will run a series of non-wing races throughout the Midwest including the Front Row Challenge, Knoxville Non-Wing Nationals, and three races on the Sprint Bandits TNT series.

Saturday, he will compete in the penultimate round of the Golden State Challenge Series at Ocean Speedway before flying out to Knoxville, Iowa for Sunday’s Non-Wing Nationals.

“I’ve known JJ since I raced Outlaw Karts in Iowa and we’ve been friends ever since,” Larson said. “This is the first open weekend I’ve had all year to go run with him so we are taking advantage of it.”

The busy week will see Larson leave California at 6 a.m. Sunday morning with his flight landing in Iowa at 1 p.m.

“I feel like I need to run out of state more to get more exposure,” Larson said. “Sunday is going to be a day spent getting used to the non-wing car because I am still not comfortable in those cars.”

Larson will race in the Midwest through August 17th before coming back to California for an Ocean Sprint points race on Friday August 20th.

The Golden State Challenge Series King of California will wrap up its 2010 campaign on August 21st in Placerville, where Larson will look to hold off all-time wins leader Brent Kaeding for the championship. The championship would make Larson the youngest champion in series history.

Larson’s fall schedule will see him compete in high profile races such as the USAC Non-Wing event on Labor Day weekend at Calistoga. The following week, he will compete in the most prestigious sprint car race on the West Coast, the Gold Cup Race of Champions in Chico.

“We are always decent at Chico and we made the A-Main last year,” Larson said. “Our expectations are higher this time and I think a top-five or top-ten finish is possible.”

By the end of the 2010, Larson has the opportunity to be not only the youngest champion in Ocean Sprints history but also in the Golden State Challenge Series. Larson, at just 18 years old, is quickly establishing himself as one of the top racers in the state of California and hopes to get the attention to move up in the racing world.

“I just gotta keep doing what I’m doing and finish ahead of Brent (Kaeding) in every race,” Larson said. “Next year I’d love to run Outlaws, ASCS, USAC, or whatever else is out there. I’d be happy with any of it.”