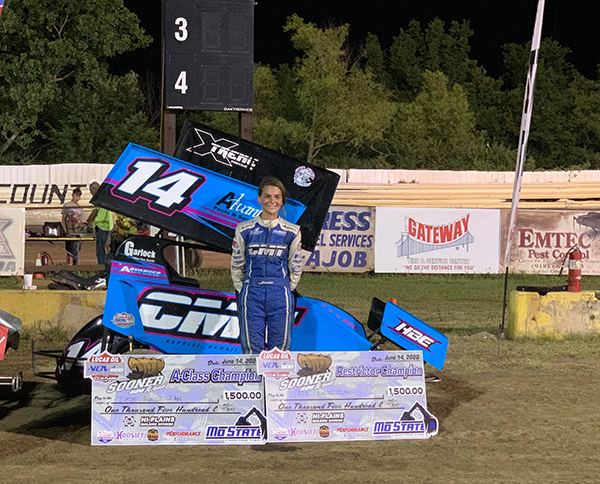 CLOVIS, CALIFORNIA (June 15, 2020) – Jade Avedisian of Clovis, Calif. persevered through five consecutive nights of competition to achieve a career-defining feat, winning both the A Class and Restricted championships during the National Open Wheel 600 Series Sooner Speedweek. The five-night extravaganza of Micro Sprint racing began on Wednesday in Caney, KS and ended in Sapulpa, OK. 13 year-old Avedisian scored three wins and a perfect ten-for-ten top-five finishes to win the championships.

Her week started off strong on Wednesday with the feature win at Caney Valley Speedway in Restricted, along with a third-place effort from seventh starting position in A Class. Traveling to Creek County Speedway on Thursday, Avedisian scored again in Restricted with another checkered flag and improved by one position for a second-place finish in the A Class.

Her accomplishment on Friday night at Red Dirt Raceway in Meeker, OK was perhaps the highlight of the week. Avedisian led 100-time NOW600 race winner Frank Flud through lapped traffic to take her second career A Class victory and the points lead in that division. She added a fourth-place finish in Restricted.

Perhaps the most challenging event of the Speedweek came on Saturday night at Port City Raceway in Tulsa, one of the epicenters for Micro Sprint racing. The event served as a track points race as well with 222 cars on the grounds and racing that stretched into the late hours of Sunday morning. Avedisian finished fourth in both features after winning both of her heat races, banging the boards on the top shelf throughout each feature.

Sunday’s finale was a return to Creek County Speedway, where Avedisian only needed consistency to wrap up the championships. She delivered when it counted, with a solid fifth place finish in A Class after starting ninth, then running second in the Restricted feature.

Avedisian in her Driven Performance chassis won the A Class championship by 33 markers over Frank Flud and the rest of the 76 competitors. In Restricted, her margin was nine points over Garrett Benson out of a field of 45 drivers.

Avedisian will return to action on July 2-4 at Sweet Springs Motorsports Complex in Sweet Springs, MO. for the $20,000 to win John Hinck Memorial for Outlaw Micro Sprints.