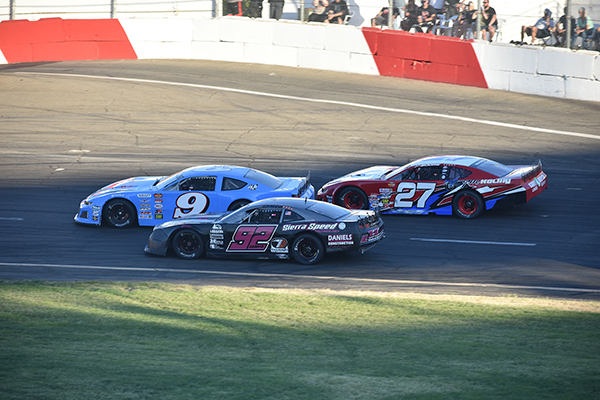 Zampa paced qualifying then started fifth after the invert for the first 35-lap feature. Incoming second in points Thomas Martin of Auburn led the way on the one-third mile. The first caution came on lap six when Daniels and Loomis’ Michael Mitchell tangled in turn one. Daniels had to pit with a flat tire and restart at the back of the field. Martin picked the inside on the restart and kept possession of the lead.

Zampa made a daring three-wide maneuver exiting turn two to edge inside Martin. He finally cleared Martin for the lead on lap ten. A great battle developed for fourth involving Loomis’ Chris Scribner and Fort Bragg’s Kylie Daniels. The caution flew on lap 28 when Kenna Mitchell spun on the front stretch. Zampa kept the lead to the finish, while points leader John Moore of Granite Bay passed Martin for second. Scribner and Michael Mitchell rounded out the top-five.

The second 35-lap contest featured an eight-car inversion which allowed Aidan Daniels to start on the pole while Zampa started eighth. By the fifth lap, Daniels was in command and Zampa found himself mired back in seventh. Zampa picked up the pace from there, advancing to third just five laps later. Zampa and Mitchell then tangled in turn two, resulting in a hard crash into the backstretch wall ending Zampa’s night on lap 15.

Aidan and his sister Kylie Daniels shared the front row on the restart, but Aidan kept the lead. Calvin Hegje spun on the inside of Michael Mitchell in turn one to require a caution with seven laps to go. The Daniels siblings restarted at the front again with Moore getting up to second inside of Kylie Daniels. Aidan Daniels fended off Moore for his second win of the season. Kylie Daniels, Scribner, and Kenna Mitchell were the top-five finishers.

The success for the Anderson Logging team out of Fort Bragg continued when Lane Anderson won his second Jr. Late Model race of the year in a thrilling battle with Kenna Mitchell. 2019 Mini Cup/Bandolero runner-up Trey Daniels of Fort Bragg paced Mitchell and Anderson in an ultra-tight lead pack. Anderson spun from third on lap 20 on the backstretch to bring out the caution. Mitchell seized the lead from Daniels on the restart before Daniels slowed with an issue to end his night.

Duplicating the winning pass by his mentor Dylan Zampa in the Pro Late Models, Anderson made a three-wide move inside Mitchell and Roseville’s Conor West on the restart to take the lead. Anderson led Mitchell, West, and Bella Thomsen as the finishers at the checkered flag.

Riebes Auto Parts Super Stock points leader Josh Whitfield of Roseville had perhaps his hardest-fought victory for his ninth win of the 2021 season. 2020 champion Andrew Peeler opened the race with the lead after starting on the pole. Roseville’s Roy Smith took over the top spot by using the outside on lap three.

Jumping to the outside and then trying the inside both came up short for Whitfield on consecutive laps. He drove inside of Smith then used lapped traffic as a pick to take sole possession of the lead by lap 23. Whitfield took the win followed by Smith, Wilkins, Peeler, and Rancho Cordova’s Gary Eisenhour.

Matthew Fuhs of Roseville won his second consecutive F4 main event. Lincoln’s Brandon Frantz led the first seven laps before Fuhs took the lead on the outside on lap eight. Frantz fought back on the bottom to lead lap nine before Fuhs led lap ten. The caution flew for points leader Ray Molina of Roseville slowing. On the restart, Fuhs made the decisive pass on the outside to lead lap 13. Matthew Cockrum, John Sproule, Fuhs, and Dan Chery rounded out the top-five.

The battling in the Mini Cup division continued between 2021 points leader Colton Nelson of Auburn and 2020 champion Bella Thomsen of El Dorado Hills. Nelson earned victory on this round of the battle ahead of Thomsen, Stockton’s Lucas Burton, and Roseville’s Dayton Broyles.

Jesus Campos of Dixon navigated through the destruction to take the $1,000-to-win Riebes Auto Parts Trailer Bash in a 15-lap contest. Kenny Dretzka and Richard Lavallee rounded out the top-three, while 2021 race winners Alan Bridgman of Lincoln and Roseville’s Loren Chitwood were both knocked out early in the competition.