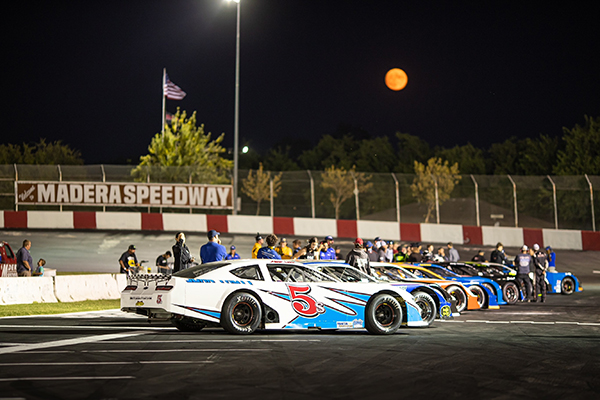 MADERA, CALIF. (September 15, 2021) – Saturday night at Madera Speedway will be the pivotal penultimate rounds for the Nut Up Pro Late Models and 51FIFTY Jr. Late Models as the MAVTV-televised series charge towards deciding their 2021 championships. The INEX Bandoleros will join the action on Saturday night as well. Photo by Joshua Rodriguez

Ticket information can be found at: http://racemadera.com/ticket-info.html with online sales available through MyRacePass. Tickets can also be purchased at the gate. Race fans can also view the live streaming coverage on Short Track TV on YouTube beginning at 6:00pm Pacific.

The breakout summer for Vancouver, Wash.’s Jadan Walbridge continued in the Nut Up Pro Late Models in round seven in August. Walbridge drove off with a commanding victory, leading all 80-laps around the one-third mile speedway. The victory boosted the 16-year-old past 200 laps led for the season and gives him a 16-point advantage over Military Tribute Night winner Matt Erickson. Erickson is tied for second with Ron Spencer Red, White, and Blue Classic winner Tyler Herzog. Herzog has stayed in the championship picture despite not earning any qualifying points throughout the season, while Walbridge has earned 14 qualifying points this season.

Las Vegas’ Kyle Keller earned a maximum five qualifying points in round seven with his first fast-time of the year. He sits fourth in the championship followed by Jason Aguirre. Keller and Aguirre are also the top-two in the non-televised Madera Late Model division as well. The Nut Up Pro Late Models race for 80-laps with a 50-lap opening segment and a 30-lap run to the finish.

Smartsville’s Brody Armtrout has won four consecutive 51FIFTY Jr. Late Model Series races to cut Jacob Smith’s championship lead down to just 13-points with two races to go. Smith, hailing from Eagle, Idaho, overcame crash damage to salvage a critical fifth place finish in round seven. Texan Barrett Polhemus traded the lead back-and-forth with Armtrout in August but had to surrender the lead for a restart violation. He will continue his hunt for a victory from 26-points out of the lead in third in the standings.

Manteca’s Ethan Nascimento has claimed two fast-time awards in 2021 to earn fourth in the championship. Colorado’s Holly Clark rounds out the top-five. 70-laps of racing for the drivers ages 10-16 years are on tap including a Mission Racing Style Tortilla Chips break at lap 40 for MAVTV-interviews and car adjustments.

Madera’s youngest racers compete in the INEX Bandolero division, which will be retooled to be exclusively Bandoleros using a restrictor plate. The change in course could impact the momentum of points leader Logan Chambers of Bakersfield who has scored five victories this year. Madera’s Joey Kennealy has earned a pair of wins as well with Bakersfield’s Caden Cordova rounding out the top-three in the standings heading into Saturday’s 20 lapper.

Action gets underway on Friday with practice from 5pm until 8:30pm with pit gates opening at 3pm. On Saturday, pit gates open at noon with practice at 2:30pm. Qualifying hits the track at 4:30 followed by heat races. Short Track TV goes live at 6:00pm with opening ceremonies and the three features to follow.

Madera Racing on MAVTV airs Monday nights at 4:00pm Pacific. The fourth round of the Nut Up Pro Late Models airs on September 27th!