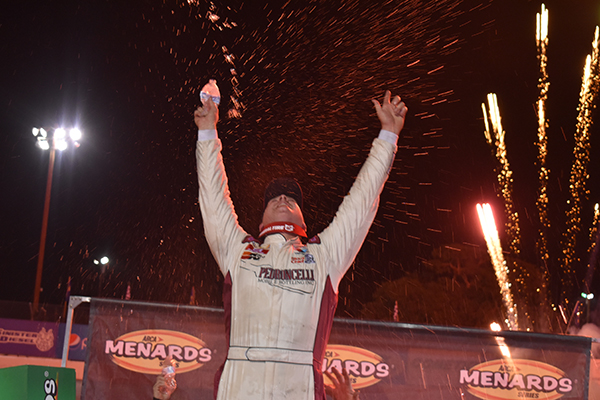 ROSEVILLE, Calif. (October 10, 2021) – The annual NAPA AutoCare 150 presented by Berco Redwood at Roseville’s All American Speedway delivered a one-two punch of excitement, with the capacity crowd treated to a thrilling win for Paul Pedroncelli, Jr. of Napa plus six NASCAR weekly series championship races. The action closed the 2021 circle track season at the one-third mile oval. Photo by Don Thompson

North Carolina’s Taylor Gray again suffered heartbreak in Roseville, bouncing from contention with a spin in turn two on lap 47 before being tagged by Boise’s Josh Fanopoulos. Heavy fluid on the backstretch necessitated a red flag with 100 laps remaining in the contest.

The ensuing restart played to leading rookie Jake Drew of Fullerton as he used the inside to lead lap 53. Both Brian Kamisky of Anderson and Japanese driver Takuma Koga spun for the next caution. Drew held the lead from the inside on the restart.

Pedroncelli and Idaho’s Travis Millburn came together fighting within the top-five and Drew maintained the lead on that restart as well. Love battled with Joey Iest for third while Moore tracked down Drew in lapped traffic. Moore used the outside to drive past Drew on the backstretch lead lap 90. Polesitter Thompson limped to a stop with a flat left rear tire for the next caution.

Iest worked his way to the inside of Moore, winning a side-by-side battle to take over the lead on lap 121. Drew made a dramatic three-wide maneuver down the backstretch, passing both Iest and Moore to lead lap 122. Milburn stopped in turn four for an end to his evening on lap 128.

The wildest action occurred when the green flag came back out. Moore restarted outside Drew, then attempted to cut in between Drew and Iest into turn one. Iest and Moore had contact, shooting up Moore up the hill into Drew. Love was tangled up in the incident as well. Moore, Drew, and Love would continue in the race but lost numerous positions. Love then spun on the frontstretch battling with Drew on the restart.

That caution set up a one-lap shootout with Iest in the lead and Pedroncelli restarting inside of him. Pedroncelli put together a strong run on the final lap, passing Iest into turn three to become the next first-time West Series winner at Roseville. Iest finished second with Trevor Huddleston of Aguora Hills navigating through the melees to finish third. Aromas’ Todd Souza and Moore rounded out the top-five.

Calvin Hegje led the first circuit of the 50-lap main event. Roseville’s Shannon Mansch spun on the backstretch for the first caution of the race. Fort Bragg’s Aidan Daniels spun on the restart and collected Moore. Both drivers were able to continue with light damage. Cole Moore spun battling with Mansch as they approached the melee as well.

Michael Mitchell of Loomis took the lead on the outside. A few laps later Dylan Zampa of Napa grabbed second. Kenna Mitchell spun trying to pass Hegje for third requiring a caution flag on lap 23. Mitchell held the lead over Zampa on the restart while Cole Moore drove up to third. Zampa hounded Mitchell for the top spot, taking over the lead with an inside pass on the backstretch on lap 43. Kylie Daniels moved into second past Michael Mitchell on lap 47 for her career best effort. Zampa took his sixth win ahead of Daniels, Cole Moore, and Michael Mitchell with Hegje winning a battle with John Moore for fifth.

Windsor’s Sammy Nuno was one of several first-time winners on Saturday night, claiming an exciting Jaws Gear & Axle Modified 30-lap feature. Rick Andersen of North Highlands led the way in his return to the speedway. Nuno took over the top spot on lap ten while sixth-starting Brandon White of Eureka was on the move to second by lap 12. Colfax’s Ralph Bailey and Andersen came together in turn one for a caution with ten laps to go. The caution brought on great action between Nuno, White, and 2020 champion Jason Philpot. Nuno survived the onslaught for his first win in the Modifieds at Roseville ahead of Philpot, White, Tyler Wentworth, and 2021 champion Eric Price, Jr.

Josh Whitfield of Roseville grabbed his tenth Riebes Auto Parts Super Stocks win in dramatic fashion to close out his 2021 championship season. Tim Walters used the outside line to lead the first two laps until Phil Wilkins of Roseville used the outside himself to lead lap three. Whitfield was in pursuit, also going outside to lead lap nine. A caution flew on lap 15 for Roseville’s Jeremy Fritts spinning in turn two. When action resumed, Eureka’s Brandon White challenged Whitfield. Whitfield withstood the close battle, winning by just a car length over White, Wilkins, 2020 champion Andrew Peeler, and Roseville’s Roy Smith.

Citrus Heights’ Vic Theberge won a battle with Matthew Fuhs for the F4 race win, while Fuhs took over the championship in the final night of competition to win the 2021 series. Four-wide action for the lead allowed Lincoln’s Brandon Frantz to take the lead. Frantz then suffered a mechanical failure that required a red flag on lap 13. After a lengthy cleanup, Fuhs and Theberge battled for the win. Theberge took the lead on lap 18 and won his first main event of the season. Fuhs, Matthew Cockrum, John Sproule, and Rich Innis rounded out the top-five.

15-year-old Kenna Mitchell of Loomis earned her fifth Jr. Late Model triumph of the year to also win the 2021 championship. Fort Bragg’s Trey Daniels led the first two laps before spinning in turn one and colliding with Mitchell. He was unable to continue. Fort Bragg’s Lane Anderson assumed the lead with Mitchell in pursuit. Mitchell grabbed the lead on the inside line on lap 14. Mitchell led Anderson, Colton Nelson, Bella Thomsen, and Daniels at the finish of the 20-lap race.

Lincoln’s Anthony Bean overcame numerous challenges to win the Mini Cup/Bando main event for his first-career win. The nine-year-old topped Dayton Broyles for the victory. Auburn’s Colton Nelson recovered from a spin with six to go to finish third and win the championship. 2020 champion Bella Thomsen and Stockton’s Lucas Burton rounded out the top-five.

All American Speedway’s 2021 season concludes on October 23 with the Malicious Monster Truck tour. Both a matinee show and evening show are scheduled, with the evening show to feature the Riebes Auto Parts Trailer Bash finale. Tickets and information available at www.AllAmericanSpeedway.com