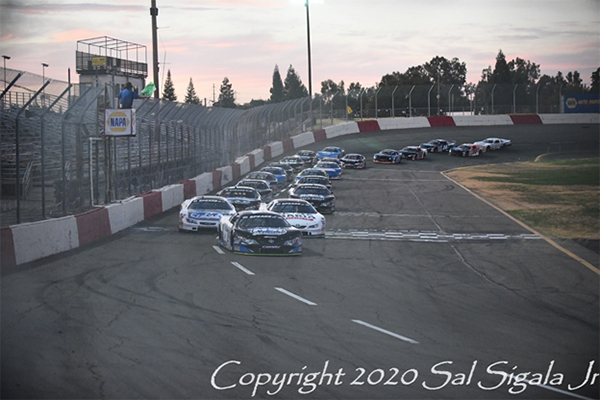 Event: The JM Environmental “Wild West Shootout Are You Ready 147” presented by 51 FIFTY LTM will take place at All American Speedway (CA) on May 22nd. It will be the first of three “Shootout“ events for the series, sponsored by John Moore and JM Environmental.  Round #1 will pay $8,000 to the winner. $1,000 leader bonuses will be paid on lap 27 and lap 127, as well as a $5,000 bonus for any driver qualifying in the top-eight, that starts at the rear and wins the event. The event will feature green flag runs of no longer than 40 laps, unless it is within the last 25 laps. Teams will start the Main Event straight-up based upon qualifying, unless a team decides to take the “to the back” challenge. The unique format is the brainchild of SRL and All-American Speedway competitor John Moore. “I love the sport, I love the people, I love the competition and I love the excitement that racing brings to us all”, Moore expressed. “I always look to the series above for guidance when switching up the rules with straight up starts. The fastest in practice will qualify last because he earned it. We have Competition Yellows because I like to rerack  the field. The crowd loves it, the drivers love it, …other than the top three, and it’s just good fun.”

Tight Championship Battle: 2015 SRL Champion Jacob Gomes leads Rookie-of-the-Year Challenger Buddy Shepherd by a mere three points. Derek Thorn is only 15 points out of the lead. Gomes is the only driver to finish in the top-five in each of the first four events. Shepherd has finished in the top-10 in each event and has led the third most laps of the season, behind Thorn and Preston Peltier. Thorn has been on fire over the last three events, winning each of them to a tune of $20,000. The remainder of the top-five is made up of Cale Kanke and Kole Raz.

Rookie Battle: Buddy Shepherd leads the way in the Rookie-of-the-Year battle over Kole Raz and Brandon Farrington. Shepherd has a best finish of second at the Winter Showdown at Kern County Raceway and was the highest finishing rookie in three events. Raz was the highest finishing rookie in Round #3 at Irwindale Speedway, where he finished a career best third. Brandon Farrington has a best finish of seventh, also in Round #3 of the season. Corey Neveau and Dylan Garner round out the top-five in the rookie standings. 15 rookies have participated in the 2021 campaign. Previous Winners: Derek Thorn is the only previous SRL winner at All American Speedway entered in this weekend’s event. Thorn has scored four wins in the series at Roseville. Other former winners include Troy Ermish, M.K. Kanke, Eric Holmes, Bobby Hodges, and Jeremy Doss.  Thorn swept both Roseville events in 2020.

Qualifying: In an area usually dominated by Derek Thorn, there has be a different “PFC Brakes Zero Drag Fast Time Award Winner” at each event in 2021. Casey Roderick was quickest at the season opening All-Star Showdown at Irwindale Speedway. Preston Peltier turned the trick at the Winter Showdown at Kern County Raceway. Brandon Farrington found himself at the top in Round #3 at Irwindale, and Thorn got his first at Stockton three weeks ago.

Hometrack: John and Cole Moore consider All-American Speedway their home track. The father and son combination have dominated at Roseville in 2021. John Moore has prevailed in four of the five NASCAR Advanced Auto Parts Weekly Racing Series Late Model events. Cole has won all eight of the Bill McAnally Racing Drivers Academy events at the facility. Cole has a win at Roseville in the Pacific Challenge Series and three finishes of sixth or better in his three SRL starts. John has three career SRL starts, with a career best second place finish to go along with three top-10 finishes. That second-place finish was achieved in 2020.

Return: 2011 SPEARS SRL Southwest Tour Series Rookie-of-the-Year, Michael Sandoval, will make his first series start since 2018. Sandoval has three career SRL starts at the facility, with a best finish of seventh in 2012. He also possesses two Pacific Challenge Series starts, scoring an eighth in 2018. It is a facility where the Ripon, CA driver got his first start in racing and is pleased to be returning to in the SRL. “I’m really excited to be back behind the wheel at AAS”, Sandoval stated. “It’s actually where I first got behind the wheel in a Mini Cup Car years ago, and where I fell in love with racing. To be coming back in the SRL car is awesome. The racing is always great and everyone from the officials to the drivers are like a family and always there to give a helping hand.”

Winning Tradition: The Kanke family is know for their abilities behind the wheel of a race car. M.K. Kanke is a former SRL Champion and the winningest driver in NASCAR Southwest Tour Series history. M.K. has an SRL win at All American Speedway and he will be helping his son Cale do the same this weekend in Roseville. Cale has gotten the season off to a strong start and sits fourth in the season standings, finishing no worse than ninth. He will make his Super Late Model debut at the facility this weekend, after competing in five SRL Legend Series events in the past.

Speaking of Debut’s: Zach Telford will return to the scene of his first career SPEARS SRL Southwest Tour Series start this weekend. Telford made that debut in August of 2020, bringing home a 10th place finish. Telford will be back in the Garcia Racing entry this weekend, looking to score his first career top-five in the series, after finishing sixth at Stockton 99 Speedway the previous event.

Teammates: The Duo of Blaine Rocha and Ross Strmiska will be making the trip to Roseville this weekend. The two California Central Valley racers will be ones to watch as Rocha is coming off a runner-up finish at Stockton 99 Speedway on May 1st. He will be looking to score his first top-five at All American Speedway, where he has only two series starts. Strmiska is coming off a seventh place effort at Stockton and has three top-10 finishes at AAS in five career starts, the last being in 2012 when rear end issues ended his night early. Welcome Back Fans: Fans will be allowed to return to All American Speedway to see the SPEARS SRL Southwest Tour Series in person for the first time since April of 2019. Tickets must be ordered on-line, with fans requested to go to www.AllAmericanSpeedway.com, to order advanced tickets. All attendee’s will be required to have a ticket selected in advance on-line to attend. Covid-19 protocols will be in place for the event, so check on-line with All American Speedway for details.

Big Weekend: The SPEARS SRL Southwest Tour Series will be joined by the SPEARS Pro Late Model Series presented by Sigma Performance Services, as well as the SPEARS Modified Series. Both those series will make their debut this weekend at the 1/3-mile facility. Jeremy Doss will be gunning for his fifth straight win in the Pro Late Model Division, and will take on a field that will include local stars Matthew Wendt, David Lewellen and Jason Romero. The Modifieds will see local runners Rick Anderson, Tyler Mullican, Ralph Bailey, Kris Price and Eric Price join the action trying to knock off championship leaders Jeremy Doss, Travis Thirkettle, Eddie Secord, Travis McCullough and Rookie-of-the-Year leader Sam Jacks.

Coverage: For those unable to attend the event in person, all the action can be seen LIVE at www.SpearsRacing.TV or on a delayed basis on MAVTV. Celebrating its twenty-first season in 2021, the SPEARS Southwest Tour Series is a regional stock car series competing on paved ovals in the southwestern portion of the U.S. “The SPEARS Southwest Tour Series…Where the Champions Race”.