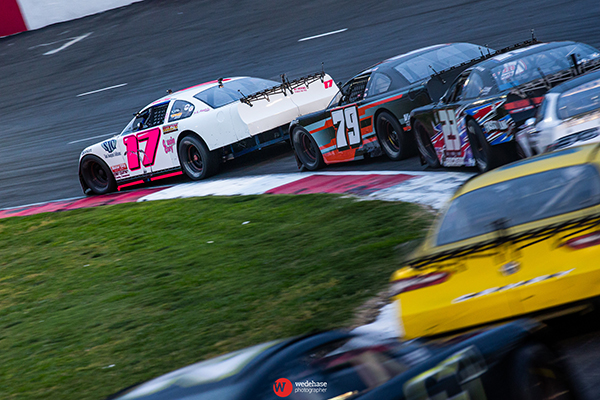 MADERA, CALIF. (May 18, 2021) – The Madera Speedway honors the men and women who protect America with this Saturday’s Military Tribute Night. MAVTV-televised stock car action brings the best Nut Up Pro Late Models and 51FIFTY Jr. Late Models in the west to the fastest one-third mile, joined by the Challenge Cup series, Mini Cups vs. Bandoleros, and Modified Super Toyotas.

Ticket information can be found at: http://racemadera.com/ticket-info.html with online sales available through MyRacePass. Race fans can also view the live streaming coverage on Short Track TV on YouTube beginning at 5:30pm Pacific.

2019 Nut Up Pro Late Model champion Austin Herzog won on April 24 and leads the championship by 18 markers. Herzog has had a strong car in each of the three rounds from start to finish, running in second position each night by the lap-50 break for adjustments and MAVTV interviews. Those 12 bonus points for his halfway break performance nearly equal his points advantage over multi-time champion Matt Erickson. Erickson has best finishes of second and third but only one qualifying point and no break points on his 2021 resume this season.

Tyler Herzog has a trio of top-ten finishes including a runner-up effort on opening night to rank third in the standings. Round two winner Eric Nascimento, Jr. and three-time 2021 Madera Late Model main event winner Jason Aguirre round out the top-five. The Nut Up Pro Late Models compete in an 80-lap feature with a 50-lap opening segment followed by a 30-lap run to the finish.

Wimberley, Texas’ Barrett Polhemus has used consistency to top the 51FIFTY Jr. Late Model championship. A pair of second place finishes and a fourth place finish give him a one point lead in the series for drivers ages 10-16 years old. Idaho’s Jacob Smith has had a remarkable stretch of success over the last two rounds, leading all 140-laps of competition over those races. Smith sits second in the standings ahead of Colorado’s Brody Moore. Just eight points separate the top-three.

Bakersfield’s Kercie Jung is the highest Californian from the fourth position. Jung set fast-time in the first two events and finished a season-best third in round three. Ethan Nascimento ranks fifth, just one point ahead of Colorado’s Holly Clark. The nation’s original Jr. Late Model series battles in a 70-lap feature across a 40-lap beginning stage, a break for adjustments and TV interviews, and a 30-lap finishing stage.

Logan Chambers of Bakersfield aims to be the latest Bandolero success story at Madera Speedway. Chambers has won all three features in his rookie season, leading fellow Bakersfield driver Caden Cordova by 21 points in the championship. Madera’s Joey Kennealy is third in the standings. Kingsburg’s Sam Wedehase has gone back-and-forth with Las Vegas’ Kellen Keller for the Mini Cup portion of the main events, with Wedehase twice coming out on top. His lead in the points is just two markers over Keller. The combined Bando/Mini Cup race is a 30-lap affair on Saturday night.

The high horsepower excitement of the Challenge Cup will be competing during Saturday night’s action. The 600+ horsepower, 3400 lb machines will race in a 50-lap event. A multi-car effort from John Krebs Racing will include the return of 2020 race winner Kyle Keller of Las Vegas into the division. Keller will race double duty in both the Pro Late Model and Challenge Cup. Multiple other teams will be participating in this exciting addition to Military Tribute Night.

Modified Super Toyotas round out the card for Saturday with 30-laps of grassroots racing. Tim Kammerer is winless on the year but enjoys a one-point lead over Hailey Bugg. Nick Thompson rounds out the top-three with former champions Shaun Reynolds and Ryan Reynolds in hot pursuit.

Action gets underway on Friday with practice from 5pm until 8:45pm with pit gates opening at 3pm. On Saturday, pit gates open at 11:00am with practice at 1:00pm. Qualifying hits the track at 3:05pm followed by heat races. Short Track TV goes live at 5:30pm with all five features to follow.

Madera Racing on MAVTV airs Monday nights at 4:00pm Pacific. New 2021 episodes are being prepared for a summer release while the best of the 2020 season continues to air in rotation.