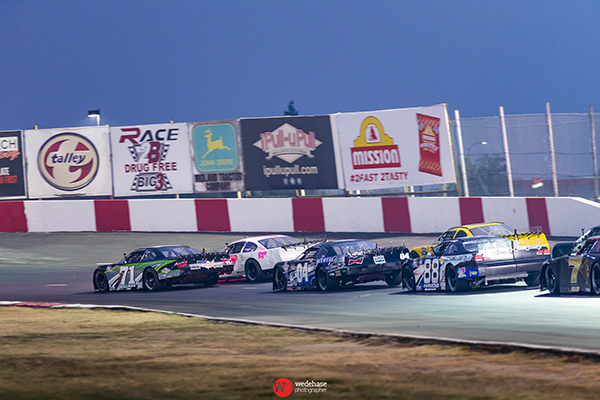 MADERA, CALIF. (October 12, 2020) – The ninth and final race of the 2020 Nut Up Pro Late Models and 51FIFTY Jr. Late Models will commence on Saturday night at Madera Speedway, as drivers complete their battles towards MAVTV-televised championships. Buddy Shepherd of Bakersfield will close out his third Nut Up Pro Late Model title in the 80-lap feature. On the 51FIFTY Jr. Late Model side, a special 70-lap finale will include cash bonuses courtesy of Frank’s Radio and Mission Foods that make it the most lucrative race in series history. Mini Cups vs. Bandoleros will also wrap up their championship fights with a combined 30-lap affair. Photo by Jason Wedehase

Race fans around the world can continue to enjoy the stock car action from Central California for free on Short Track TV on YouTube. Mission Foods, 51FIFTY, and Nut Up Industries present the full card of racing action with the stream beginning at 5:45 pm at: https://youtu.be/xK0uo_hSuVM

Both Shepherd and 51FIFTY Jr. Late Model points leader Bradley Erickson will aim to equal the largest number of wins in a single season in their respective divisions. Both drivers also enter the weekend with the track record lap in time trials after they each shattered the records on October 3rd.

Shepherd will look for his fifth win of the year, equaling a mark he set during his 2017 championship run while Matt Erickson did the same in 2016. Shepherd will also become the first three-time champion during the television era since 2015, with Erickson enjoying two televised titles along with three Open Late Model championships before that. Shepherd leads the standings by 76 points with four wins, five fast-times, and a runner-up finish in the Nut Up Short Track Shootout two weeks ago.

Second in the standings is 2007 Altamont champion Ryan Philpott. Philpott will not be able to close on Shepherd for the title but can still aim for his second victory of the season. Ross Strmiska and Blaine Rocha are separated by just 16 points in the duel for third in the championship.

Shelden Cooper leads Dylan Zampa by just two markers in a battle for fifth with 2019 51FIFTY Jr. Late Model champion Joey Iest within striking distance as well. 2019 Pro Late Model champion Austin Herzog, Mariposa’s Glen Cook, and Race 2B Drug Free Big3 champion Jeremy Doss round out the top-ten in the standings. The Nut Up Pro Late Model finale is an 80-lap race with a 50-lap opening segment, followed by MAVTV interviews and adjustments on the front stretch. A 30-lap run to the finish will decide the winner.

The most lucrative 51FIFTY Jr. Late Model Series race in series history sees nearly $10,000 in posted awards. Each of the top-five finishers will receive $1,000, while sixth through tenth each receive $500. Tenth through 15th will earn $250 as well. Among the special prizes offered is a $500 hard charger along with longest tow, best interview, cleanest driver, and hard luck awards.

Phoenix’s Bradley Erickson lowered the track record to a remarkable 14.928 second lap around the one-third mile oval. He was topped by Cole Brown of Ukiah for the feature win, however. Erickson leads Brown by 64 points in the championship entering the ninth and final 70-lap race of the year. Jake Bollman hopes to end a dry spell for Naake-Klauer Motorsports from the win column in 2020. Mike Naake’s squad has 14 wins and three championships on their Jr. Late Model resume but has not yet triumphed this year. Bollman ranks third in the standings with over 100 laps led and will continue to be a challenger for a win on Saturday.

Bakersfield drivers Kercie Jung, Kabe McClenny, and Kale McClenny round out a fast-six looking for a series win. 2019 Roseville champion Brody Armtrout of Smartsville, Quincy, WA’s Kasey Kleyn, Robbie Kennealy, and Colorado’s Cassidy Hinds round out the top-ten in the standings. 40 laps of racing will open the feature, followed by the Mission Racing Style Tortilla Chips halfway show. A 30-lap final segment wraps up the 2020 season for the drivers ages 10-16 years old.

Jeffrey Erickson hopes to give his family two championships at Madera as the 11-year-old will try to continue an undefeated season in the Bandolero division. Erickson has won all eight main events so far to lead Bakersfield’s Caden Cordova in the standings. 2019 Mini Cup champion Joey Kennealy ranks third. In the Mini Cup portion of the field, Rebecca Dubie of Tracy has won six features for the championship lead. The combined Mini Cup vs. Bandolero main event will be a 30-lap race.

Activities get underway on Friday with practice. Pit gates open at 2:30pm with the track open from 5:00pm to 8:30pm The final 30 minutes consistent of high groove practice only. Practice will be followed by a free street taco cook out presented by Mission Foods.

On Saturday, pit gates open at 11:30am with practice beginning at 1:30 pm. Qualifying will be at 3:00pm with the Mini Cup and Bandolero heat races to follow. Opening Ceremonies and live racing on YouTube is scheduled for 5:40pm with all three features afterwards.