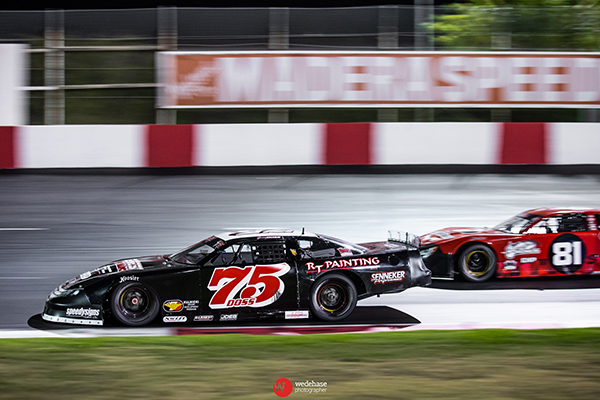 The event served as round three of the Nut Up Pro Late Model Series as well and was streamed live for free to race fans due to the COVID-19 Pandemic closing the grandstands. The event will be telecast later this fall on MAVTV as well.

The initial start of the 100-lap feature saw a multi-car skirmish into turn one. On the next attempt, 2019 Nut Up Pro Late Model champion Austin Herzog of Clovis led the opening lap. Shepherd went around the outside of Napa’s Logan Zampa to take third on lap eight. Doss clamped down on Herzog and looked inside for the lead on the front stretch on lap 14. Doss took over the top spot on lap 15.

Shepherd then attacked Herzog, with the pair running side-by-side before contact into turn one on lap 18. Both Shepherd and Huddleston passed Herzog as a result. Herzog eventually drifted to seventh in front of Bakersfield’s Racin Vernon.

A caution flew on lap 38 for Michael Mitchell and Shelden Cooper making contact in turn four. On the restart, Shepherd and Huddleston had contact on the front stretch but managed to keep going. Ross Strmiska and Logan Zampa went side-by-side for fourth with Dylan Zampa also entering the discussion for the position.

The Zampa cars made contact coming to the halfway break, with Logan spinning one lap early with 49 laps officially scored complete.

Doss picked the inside on the restart out of the break for MAVTV interviews and adjustments. The decision went in Huddleston’s favor with the Irwindale champion charging past Shepherd in turn two to lead lap 50. Huddleston’s teammate Dean Thompson emerged on the restart in fifth after starting ninth.

Mtichell’s night ended with a hard crash that involved Oklahoma’s Holley Hollan on lap 65. Racin Vernon retired to the pits with a broken rear end as well. Huddleston, despite taking the lead on the outside, picked the inside for the upcoming restart. Doss took advantage to drive past Huddleston in an identical maneuver. Huddleston fell into a great battle with Buddy Shepherd that went back-and-forth on several occasions. Huddleston and Shepherd even made contact on lap 83 but Shepherd drove away.

Shepherd ran his best lap of the main event on lap 87 but it was too little too late as Jeremy Doss claimed the $5,000 Race 2B Drug Free Big3 100-lap feature win. Doss, Huddleston, Ross Strmiska, and Carlos Vieira rounded out the top-five.

An all-female front row saw Colorado’s Holly Clark lead Bakersfield’s Kercie Jung after lap one. Jung found herself mired back in fifth early on after getting hung out on the top.

Erickson started to challenge Clark for the lead before a caution flew. Incoming points leader Seth Wise of Bakersfield had contact with Idaho’s Jody Moen, with Wise suffering some front-end damage.

Wise continued on while Erickson started outside Clark on the restart. Erickson used the top to his advantage to take the lead. Erickson picked the outside on each successive restart, while Jung took over third from Jake Bollman on lap 23. Jung then inherited second when Clark slid into turn one on lap 30. A lap later, Cody Kiemele’s night ended in a hard crash on the backstretch.

An incident involving Clark and Bollman brought out the scheduled break a lap early on lap 39. On the restart, a repaired Seth Wise led a train of cars past Jadan Walbridge. Walbridge ended up falling from third to sixth in the process.

Erickson used the outside throughout three additional restarts to maintain the lead over Jung en route to the victory. Jung equalled a series best finish for a female competitor with her second place effort. Wise, Bakesfield’s Kabe McClenny and Cole Brown rounded out the top-five.

Bradley Erickson’s 11-year-old brother Jeffrey Erickson won his third Bandolero main event of the 2020 season on Saturday night as well. Linden’s Wyatt Sansom managed to take the lead on several occasions during the caution-filled 30-lap feature. Erickson was able to claw back to Sansom within a lap or two on each try, however, making the final pass for the lead on lap 14.

Joey Kennealy rounded out the top-three in the Bandoleros while the Mini Cup race within a race saw Tracy’s Rebecca Dubie win her third consecutive event as well.