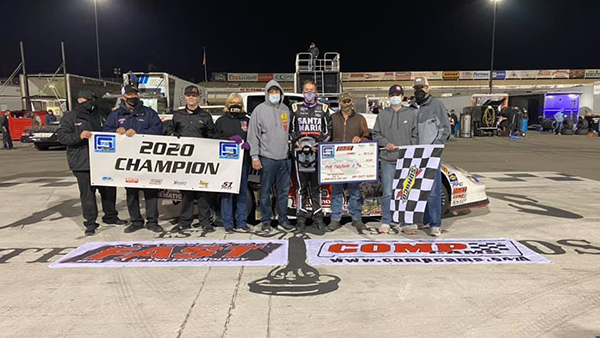 BAKERSFIELD, CALIFORNIA (December 21, 2020 from Kevin Peters) – Derek Thorn and Jeremy Doss scored victories and championships Saturday night at Kern County Raceway as the season wrapped up for both the SPEARS SRL Southwest Tour and SPEARS Modified Series. Thorn took home his eighth victory of the season and 49th career SRL triumph, to clinch his record extending fifth championship. Doss scored his fifth win of the season, to become the first driver to notch a championship in both the SPEARS Southwest Tour and SPEARS Modified Series’. In what became par for the course in 2020, the event was moved from Irwindale Speedway to Kern County Raceway, only 10 days before the scheduled affair, due to Covid-19 restrictions in Los Angeles County. Photo by Sal Sigala, Jr.

On the initial green flag, Fabozzi battled his way to the lead in the less preferred inner groove. Lupton followed with Shepherd up to third and Gomes fourth. Thorn was on the move as he dispatched Gomes on lap five and Shepherd before 10 laps were complete. Lupton challenged Fabozzi over the first 25-lap run, but was unable to gain the position when the scheduled lap-25 break was reached.

After the break, Fabozzi chose the top lane and moved out to a short lead. Shepherd was able to parlay the outer groove into a pass of Thorn for third, with Holtz taking advantage by moving into the top-five ahead of Gomes. It took Thorn six laps to get back by Shepherd and begin closing on the lead duo, who were battling side by side and nose to tail for the top spot. Lap 43 saw the #43 of Thorn close to the back of Lupton as the lead three battled nose to tail. The maximum 25-lap green flag run was reached on lap 50, with the top trio maintaining position. Shepherd, Holtz and McGhee, who moved Gomes back to seventh now the completed the top-six.

The ensuing restart found the leaders maintaining position with McGhee now up to fifth, followed by Gomes. Linny White’s solid run came to an end, when contact with the backstretch wall, in heavy racing, sent him to the pits from eighth. Lap 60 found Thorn battling under Lupton for second. As the duo raced side by side behind Fabozzi, the leader slipped in the outer groove, allowing Thorn to go from third to first on lap 64 and earn the Fluidyne High Performance “Cool Move of the Race”. As the 25 consecutive green flag lap caution fell on lap-75, Thorn led Fabozzi, Lupton, Shepherd and McGhee.

The restart saw Thorn out to a quick lead, with Gomes now moving into the top-five. Fabozzi began to struggle with Lupton getting by on lap-82. The field began to stack up behind Fabozzi, with Gomes getting by on lap 86, as Shepherd was trapped behind the fading 2019 Rookie-of-the-Year. McGhee was the next to clear Fabozzi followed by Holtz and finally Shepherd, who finally got down to join the train under Fabozzi. On lap 95, the only incident related caution fell, as Fabozzi was sent spinning in Turn 4 by Dylan Cappello, who was trapped outside of Carlos Vieira. All three competitors made contact, which resulted in the end of each of their days.

The final restart found McGhee’s fine run come to an end, when he lost a transmission. Thorn was able to pull out to a short lead, as Gomes and Holtz battled side by side for multiple laps for third. The final 20-laps clicked off quickly, as Thorn was able to extend out to a one-second lead over Lupton. Gomes was able to fight off Holtz for third with Kyle Neveau coming on strong to finish fifth. 2020 Rookie-of-the-Year Dean Thompson moved forward to finish sixth, followed by Buddy Shepherd and Keith Spangler, who was making his 100th career SRL start. Ross Strmiska and first-time starter Corey Neveau rounded out the top-10.

Thorn had to work for series victory number eight of the season, as he qualified third and had to come from fifth after the redraw. With the tight field, it took 64 laps to get to the front, as well as a mistake by the leader to achieve.

“These tires actually held up really well tonight”, Thorn recalled. “It’s probably one of the best cars we have had here. Starting fifth, I was hesitant. It’s really hard to pass at this place. You’ve got to be a lot better than the guy in first and second. Fabozzi slipped up a little bit there and let me get by the 4 (Dylan Lupton) at the same time, which made things a little bit easier. We were able to get out and set our own pace, but the car was just great tonight.”

Thorn was excited to get his fifth SPEARS SRL Series Championship, and feels fortunate to be in the situation he is with Campbell Motorsports.

“It is just awesome! It is surreal to think it has been 10 years here with Byron (Campbell). To be able to have the success we have had, and to be a driver to have the opportunity that he has given me to go out and compete at some of the best short tracks and against some of the best short track racers in the country. If I was my 10-year-old self, I’d pinch myself to know what I have been able to go do. I am just super fortunate to be able to race, and I’m just looking forward to each time and every time I get to be behind the wheel of the #43. I feel like as a team we are growing, and it is a surreal feeling to be as good as we are right now.”

Jeremy Doss had a slightly easier path to the victory at Kern County Raceway, but he also had a championship to win, leading Eddie Secord by 18 points. Doss set the Performance Friction Brakes “Zero Drag Fast Time Award” then drew the number four card to start in the four hole. The initial start found 2020 SPEARS Modified Series Rookie-of-the-Year winner Jim Coffey jumping out to the lead from the outside of row one. Doss worked his way under pole setter Jeff Longman and took up pursuit of Coffey. Doss caught Coffey on lap five and moved under the Bakersfield driver to lead lap seven, after maneuvering past the lapped traffic of Mark Allen. Lap eight found the yellow flying when Travis McCullough turned Allen coming off of Turn 3, for the first Traffic Management Inc. caution. By that juncture, Secord had moved from ninth starting to seventh, looking for Hard Charger points to close the championship gap.

The restart saw Doss pick the high line and shoot out front, followed by McCullough, who went from fourth to second, leaving Coffey and Jimmy Dickerson to battle for third. Travis Thirkettle was on the move however, as he supplanted Dickerson one lap after the restart and Coffey for third three laps later. The field would run to the lap 25 scheduled break in order, with Doss leading McCullough, Thirkettle, Coffey, Dickerson, and Secord.

Doss once again chose the outside line on the restart and pulled away, as the top-six maintained position. Dickerson bobbled on lap 28, falling back to seventh, with Secord in the top-five for the first time. The top-seven maintained position until the lapped car of Riley Massey pushed up the track into Jerry Toporek, taking Jim Coffey with them on lap 45. Coffey, who was having his best race of the season, was forced to retire from fourth during the red flag stoppage.

Restarting with 15 to go, Secord was now up to fourth and took third from Thirkettle, in the preferred outer groove. The green didn’t last long however, as contact between the fifth and sixth place cars of Dickerson and Sam Jacks saw the #5D of Dickerson spinning in Turn 4 and Jacks retiring with suspension damage. On the start, Thirkettle was almost squeezed into the outside wall by McCullough, but survived to run down Secord again to take the third position on lap 49. The final caution flew on the next lap, as contact between William Guevara and Jeff Longman saw Longman turned the wrong direction in Turn 2.

The final restart found Doss pulling away from Mccullough, with Secord back around Thirkettle in the upper groove. Secord briefly challenged McCullough, but fell back as Thirkettle once again tried to pass the #84. At the checkered Doss scored his fifth victory of the season, to take the championship over “Fast” Eddie Secord. McCullough had his best finish of the season in second, followed by Secord and Thirkettle, who finished side by side at the line. A resurging Dickerson was the final top-five driver, with William Guevara sixth.

After the race, Doss was thankful to his car owner, crew chief and crew for the opportunity to do something no other driver has accomplished.

“We had a really, really good car”, Doss exclaimed! “I just gotta thank Eddie and Cory Wilcox for giving me the opportunity to drive this car the whole year. It is pretty special to be the only guy to win a (SPEARS) Modified Championship and the SPEARS Southwest Tour Championship. I gotta thank Duane Sharp, for giving me a bad-fast racecar, and the entire crew for working so hard all the time. I feel like we were good all year. Just a couple of things out of our hands cost us some races, but I feel like we had the car to win all the time.”

Doss continued, “It is really special, me and Eddie got together at the end of last year, after that Vegas race, and we wanted to come win a championship and win races in the process. We were pretty successful at that. I think I have made him happy, and he has made me happy, and I’m just glad to get it done.”

Doss was also glad to go out with a win in the championship finale, as he told the SPEARS Modified Series.

“It’s pretty special and I’m glad we were able to finish such a crazy year on a high note!”

Doss was also grateful for his sponsors, that made the season possible.

“I gotta thank Peters Racing Engines, for giving me an amazing engine, Steve Teets Racecars, PFC Brakes, Pit Stop USA, Horsepower Project and everyone who is on-board. It feels good to get the championship.”

The Pro Late Models also joined the card, in the final event of the season. Jack Wood was able to parlay his Fast Time and Pole Position start into a win in the “Jeanette Kennedy 60”, leading every lap of the event. 11 Pro Late Models started the event that saw a constant flux behind the leader. Several drivers looked like they may have had something for Wood, including Roger Hornsby, Jordan Riddick, Blaine Rocha and Trevor Huddleston. Both Rocha and Huddleston appeared they may be the equal of Wood late in the event, but after racing side by side for multiple laps, the duo got together in Turn 1 on lap 42, ending both of their evenings, while running second and third.

The final 18 laps of competition found Wood establish an early lead over Roger Hornsby, but as the laps wound down, Hornsby closed on the rear of Woods Pro Late Model. When the checkered flew, Wood held off Hornsby by two car lengths with Jordan Riddick third over Tyler Herzog and Hans Beeler.

The 2021 season is set to begin at Irwindale Speedway in the All-Star Showdown on February 5th and 6th. All three of these divisions will be in action, as the Pro Late Models will join the SPEARS SRL Southwest Tour and SPEARS Modified Series under the same umbrella. The Super late Models will race for $30,000 and the Pro Late models, $15,000.