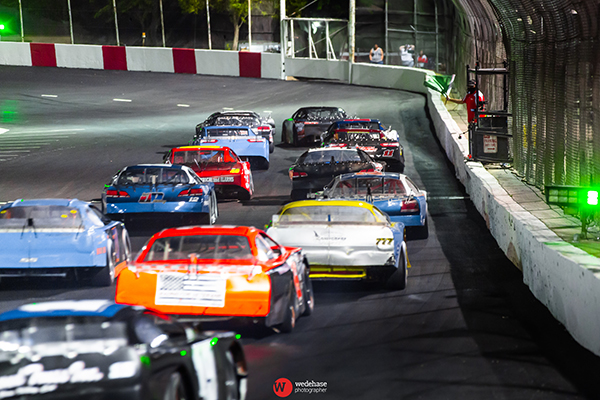 MADERA, CALIF. (November 10, 2020) – An entry list that includes many multi-generational champions of west coast stock car racing descends on Madera Speedway for this Saturday’s inaugural Turkey Triple Open. Open Late Models will battle for $2,000 to win while Open Pro Modifieds will race for $1,000 to win and Open Hobby Stocks have $500 to race for. All three features will be 75-laps, joined by the Challenge Cup Series, in an event that will be live streamed for free on Short Track TV on YouTube. The overwhelming response from teams has led to promoter Kenny Shepherd also designating the race for MAVTV television coverage as well. Photo by Jason Wedehase

The Turkey Triple Open replaces the previously scheduled 2020 Awards Banquet, which will take place safely at the track. The free live stream continues after the races for families and race team supporters to honor their favorite driver’s 2020 accomplishments from home.

“We are not able to host our 2020 Awards Banquet in a traditional manner due to COVID, and anyone that has been to a Madera Speedway Awards Banquet knows how much effort the staff puts into the event,” promoter Kenny Shepherd said. “We decided to not give up and to adjust once again to close the 2020 season out on a positive note and with high energy to pay tribute to our drivers.”

A frenzied season saw all nine MAVTV-televised Nut Up Pro Late Model and Jr. Late Model Series races plus a ten round Madera Late Model season compacted into just 21 weeks. The appetite for racing in Madera never waivered and continues into this Saturday with more than 60 teams expected in action.

The Open Late Model feature will be the dream matchup, as both the 2020 Nut Up champion Buddy Shepherd and 2020 51FIFTY champion Bradley Erickson are expected in action. They will be joined by 2019 Nut Up champion Austin Herzog, who will be part a three-generational effort with father Bryan and Grandfather Richard competing.

The Modified division has exploded this season at Madera Speedway and the one-third mile will again be a destination for open wheel teams. 2020 All American Speedway champion Jason Philpot and 2020 Bob Lehman Classic winner Cameron Austin are some of the drivers joining the action. The target sits on squarely on Eddie Secord after winning the most recent race for the Mod squad at Madera. Secord sits second in the 2020 SPEARS Mfg. Modified Series with a pair of wins this year as well.

Jaron Giannini won the opening Modified race at Madera this season for his first Modified triumph. Three-time North State Modified winner Darrin Sullivan has seven career starts at the speedway but is still looking for his first win.

The Challenge Cup Series will be buoyed by the return to the driver’s seat for John Krebs, as the patriarch of John Krebs Racing leads a five-car onslaught into Saturday’s season finale. Entries from Wilson Motorsports and Pitts Racing are also expected for the 75-lap affair.

Activities get started on Friday with practice. Gates will open at 2:45pm with the track open from 5pm to 8:30pm.

On Saturday, pit gates open at 9:00am with practice beginning at 11am. Time trials are slated for 12:40pm with an Open Late Model B-Main tentatively scheduled for 30-laps at 2:00pm. Opening ceremonies and the Short Track TV live stream begin at 2:40pm with 300 laps of racing to follow. The 2020 Awards Ceremonies will be held in victory lane following the main events and are free to all team members in attendance.