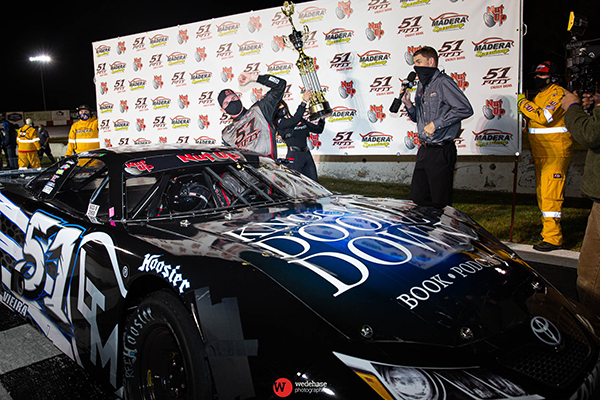 MADERA, CALIF. (March 13, 2021) – Livingston’s Carlos Vieira scored his first MAVTV-televised Nut Up Pro Late Model victory on Saturday night at Madera Speedway, earning the $5,000 season opener during a five-lap shootout to close the 100-lap feature. The opening night on the one-third mile included openers for the 51FIFTY Jr. Late Models and Mini Cups vs. Bandolero, streamed live on YouTube and set to be aired later this year on MAVTV. Photos by Jason Wedehase

Vieira drew the pole position and led at several different occasions. He then fended off multi-time champion Matt Erickson in a sprint to the finish for the win.

“It feels great. I want to thank Campbell Motorsports. Car has been good all weekend. All these guys raced hard. It was a lot of fun. Madera Speedway always puts on a good show. I felt pretty confident with the car. We’ve come close many times so it’s finally nice to get one,” Vieira said.

2019 Madera Late Model champion Jason Aguirre snaked through into second on the restart, then clamped down on Vieira for the lead. Aguirre knifed underneath Vieira on the backstretch to lead lap 19. Erickson started tenth alongside 2019 Nut Up Pro Late Model champion Austin Herzog with both drivers closing in on the top-five quickly. Eric Nascimento, Jr. worked his way into second before Austin Herzog went around the outside to take the position on lap 41. Aguirre led Austin Herzog, Nascimento, Vieira, and Erickson as the top-five when the scheduled halfway break arrived eight laps early on lap 42.

Nascimento fell steadily on the restart with mechanical troubles that hounded him the rest of the night. Herzog reeled in Aguirre for the lead twice but could not complete a pass, allowing Vieira to enter the picture. Vieira passed Herzog for second on lap 72.

He then briefly jumped underneath Aguirre in traffic on lap 74. Vieira went to the outside, storming past Aguirre to the lead on lap 78. Erickson went outside in a three-wide maneuver to advance to second with Aguirre shuffled to fourth.

Vieira picked the inside of Erickson for the final restart with five laps remaining. Erickson led lap 96 by .042 seconds before swinging wide into turn one to allow Vieira to lead lap 97. Austin Herzog dove underneath Erickson for second but slid up the race track in turn three, bouncing him out of contention. Vieira drove ahead for the win with Tyler Herzog navigating the melees to earn second. Erickson, Aguirre, and 20th starting Kabe McClenny of Bakersfield rounded out the top-five.

Kale McClenny scored his coveted first-career 51FIFTY Jr. Late Model win in a thrilling conclusion to a tumultuous race, steering his #07 Toyota clear of Texan Barrett Polhemus by a scant .007 seconds at the stripe.

Except for the debut race in the series, Saturday’s event marked the first time that a field of Jr. Late Models had taken the green flag without a previous race winner in attendance. 16 drivers ages 10-16 years old made up the grid but the aggressive tone was set quickly. Ethan Nascimento led the first five laps before contact from Idaho’s Jacob Smith sent him spinning in turn four. Nearly a dozen cars were collected in the crash, including fast-time qualifier Kercie Jung of Bakersfield getting her front wheels off the ground after colliding with Loomis’ Kenna Mitchell.

Jung was the only driver unable to continue, however. Smith was involved in several other incidents throughout the night and was relegated to the infield by officials. Cody Kiemele was the benefactor of the lap five fracas, assuming the lead position after starting fifth.

McClenny started 11th but steadily moved forward. He had a grinding battle with Kiemele for the lead with McClenny losing his rear bumper in the process. A pair of separate incidents followed with Brody Armtrout spinning in turn one and Virginian 10-year-old Tristan McKee crashing heavily into turn three.

The race went into the break on lap 32 with McClenny credited as the leader ahead of Kiemele. When action resumed, McClenny maintained the top spot while Kiemele battled with Washington’s Kasey Kleyn. A restart beckoned on lap 65 with McClenny and Kiemele sliding through turns three and four. Polhemus snuck through for second before Kiemele stopped with a flat left front tire.

The final three laps were a side-by-side thrill ride between McClenny and Polheums, with McClenny winning by just inches at the stripe. Colorado’s Brody Moore was third while Nascimento came back to finish fourth. Armtrout rounded out the top-five. 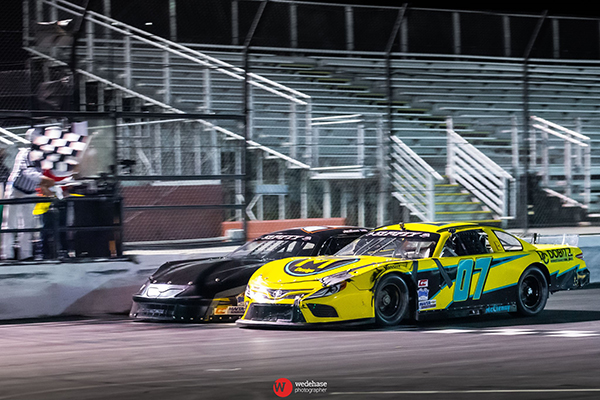