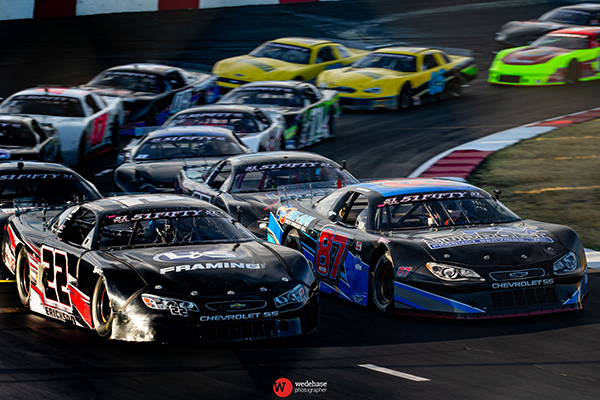 MADERA, CALIF. (March 10, 2021) – The 50th season of racing at Madera Speedway opens Saturday with the seventh season of MAVTV-televised Late Model competition, as the Nut Up Pro Late Models will compete for $5,000 to win in a 100-lap contest. 51FIFTY Jr. Late Models and Mini Cups vs. Bandoleros are also on deck at the one-third mile asphalt oval at the Madera Fairgrounds. Photo by Jason Wedehase

Although the state of California is inching closer to reopening race tracks and stadiums to fans, Saturday’s action will not be open to spectators. Race fans can tune in to the free live stream at 4:50 pm on the Short Track TV YouTube, presented by Mission Foods, 51FIFTY, and Nut Up Industries.

Bradley Erickson of Phoenix, Ariz. enters his first full season of Pro Late Model competition on the strength of five wins and the 2021 51FIFTY Jr. Late Model Series championship. He also won his Pro Late Model debut in November, sweeping past Eric Nascimento, Jr. to win the Turkey Triple Open 75. Bakersfield’s Seth Wise won the first two rounds of the 2020 Jr. Late Model series with three total wins and looks poised to perform as he moves up to a full-time Pro campaign this season.

Shelden Cooper likely did the most with the least at Madera last season. Building off a B-Main triumph in the 2019 Short Track Shootout, Cooper finished fifth in the 2020 Nut Up Pro Late Model standings. An outstanding roster of new, returning, and veteran drivers makes up a loaded field for the season opener. A 20-lap B-Main will be held (if necessary), feeding the final four starting positions for the feature. The 26-car, 100-lap feature will be broken into a pair of 50-lap segments with a break for adjustments and MAVTV interviews. The winner will claim a lucrative $5,000 prize.

The drivers ages 10-16 years old in the 51FIFTY Jr. Late Model Series approach their 70-lap season opener with optimism and the opportunity for a new star to be born. Saturday’s field will not include any drivers with a victory in the groundbreaking series. Drivers taking on the veteran role include Bakersfield drivers Kale McClenny – age 13 – and Kercie Jung – age 15. 15-year-old Robbie Kennealy recently relocated to Madera, Calif. in his quest for continued success in the division. Other returning drivers include 14-year-old Cody Kiemele of Riverside, 12-year-old Kasey Kleyn of Quincy, Wash, and Colorado’s Holly Clark and Brody Moore.

New faces racing for the championship include 16-year-old Jacob Smith of Idaho, 10-year-old Virginian driver Tristan McKee, and Texan Barrett Polhemus. Perhaps the most highly anticipated driver is 11-year-old Jeffrey Erickson of Phoenix, Ariz., moving into the division after an undefeated nine-for-nine championship year in the Bandoleros.

The 51FIFTY Jr. Late Models race in 70-lap events with a 40-lap opening segment followed by a 30-lap race to the finish.

Joining the action again in 2021 is the Mini Cup vs. Bandolero division where the youngest drivers compete at Madera Speedway. Several new faces from the Quarter Midget ranks have graduated to these cars including Sam Wedehase in the Mini Cup division. 30-laps are scheduled for Saturday’s main event.

Action gets underway on Friday with practice from 5pm until 8pm with pit gates opening at 3pm. On Saturday, pit gates open at 11am with practice at 1pm. Qualifying hits the track at 2:45pm followed by heat races and B-Mains if necessary. Short Track TV goes live at 4:50pm with all three features to follow.