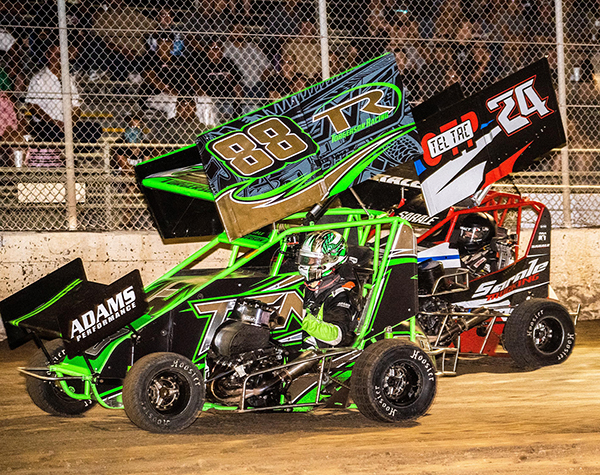 STOCKTON, CALIFORNIA (August 3, 2021) – The ninth round of the 2021 Micro Sprint championships at Stockton’s Delta Speedway is on tap for this Saturday night, with four divisions ready to race at the 1/7th mile dirt oval presented by Financial Center Credit Union. Photo by Maxwell Patrick

Stockton’s Caden Sarale has moved to the top of the standings in both the Super 600 and Non-Wing divisions in search of the $1,000-to-win track championships. Sarale looks to cement his place as one of the most successful racers in the 35-year history of the speedway, working on his third consecutive sweep of each division’s title.

Some of the more successful champions in track history have included Rick DeCosta in AA Twin over the 1988 through 1992 seasons and Derek Overkamp who won the 250 championships during four consecutive seasons from 2010 to 2013. DeCosta won at least eight championships according to available records, which Sarale will equal in his career if he can wrap up his current title runs. With six races remaining however, the title picture in each class is far from complete.

Sarale enjoys a 55-point advantage in Non-Wing on the strength of two victories through eight races. Oregon’s Austin Torgerson and Tracy’s Brandon Riveira trail Sarale while still searching for their first triumphs of 2021. Austin’s younger brother Ashton ranks fourth with a single win followed by Springville’s Cameron Paul in fifth. Non-Wing competes for a 30-lap feature for $500-to-win.

The Super 600 championship is much closer, with Sarale six points ahead of four-time track champion Nikko Panella. Each of the Stockton-based drivers have earned one victory during the campaign. Fresno’s Caeden Steele has used three wins to place himself 19-points behind in third. Austin Torgerson and Stockton’s Alex Panella round out the top-five. Super 600 will also compete for 30-laps and $500-to-win.

Fresno’s Colton Key leads the Restricted class by a strong 49-point margin ahead of Visalia’s Jett Barnes. Sacramento’s Austin Wood, Castro Valley’s Andrew Smith, and round eight winner Isabel Barnes of Brentwood make up the top-five. Restricted will compete in a 25-lap feature for $300-to-win.

Five-time Jr. Sprints feature winner Brody Rubio of Manteca leads the youngest drivers at the speedway by 53-points heading into Saturday’s 20-lap feature. Hayden Stepps of Oakdale is the series’ most recent winner and sits in second overall. Levi Osborne of Millbrae, Josiah Vega of Antioch, and Vito Cancilla of Pleasant Hill make up the top-five.

Tickets are $10 for adults ages 13 and up, $5 for kids ages 6 to 12, seniors 55+, and military, and kids 5 and under are free! Pit Passes can also be pre-purchased by competitors for $20 or purchased at the gate. Pit gates open at noon with the driver’s meeting at 4:30 pm. Hot laps and qualifying will follow.