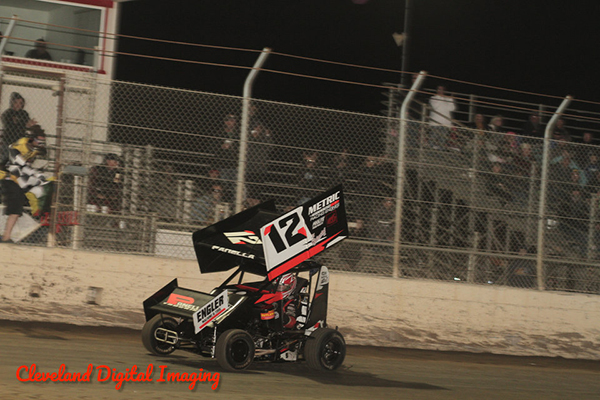 STOCKTON, CALIFORNIA (October 25, 2020 by Gary Thomas) – Stockton’s Alex Panella and Watsonville’s Rickey Sanders put on a thrilling show over the closing laps to help finish off the season at Delta Speedway on Saturday. In the end it was Panella prevailing at the checkered flag to scoop up the $2,000 grand prize with the Super 600s at Turkey Bowl XX. Photo by Chris Cleveland

The box score will show Panella captured the Super 600 A-main from the pole however, it was anything but easy for the driver of the Panella Trucking No. 12 machine. “It was a great race at the end with Rickey Sanders and I’m pumped to be standing up here right now,” he commented in victory lane. “I really don’t know what to say. I just can’t believe we pulled it off. It’s awesome to win the Turkey Bowl and I want to thank all of our sponsors and everyone that helps us out.”

Panella had his way with things out front early in the 40-lapper but soon felt pressure in the form of Fresno’s Caden Steele, who ran the bottom side of the speedway to perfection. At one point Steele made a beautiful move to snag the lead in traffic, but a caution at that same time negated the pass. A well-prepared surface lent itself to some fantastic racing throughout the field with numerous sliders and bold moves taking place.

As the laps wound down Sanders picked off cars and moved in on Panella in heavy duty lapped traffic. The duo proceeded to trade the lead numerous times with close slide jobs in every corner. At the checkered it was Panella narrowly beating out Sanders for the breathtaking victory. Nikko Panella came home in third with B-main winner and 17th starter Jake Hagopian in fourth. Steele rounded out the top-five.

The Non-Wing feature was all about Mitchel Moles who checked out from the field and worked lapped traffic like a magician. The Micro stud captured the 40-lap finale by over 6 seconds to win the Turkey Bowl for the second consecutive season. Behind him though, the action was hot and heavy with Fresno’s Tyler Smith coming out on top of an excellent battle with Madero Ranchos driver Dalton Hill to earn a runner up finish.

Hill crossed the stripe in third with Robbie Lewis and Brandon Carey completing the top-five. B-main wins during the night went to Katey Syra and Brody Petrie.

The 30-lap Restricted main event was a back and forth duel that ended with Dalton Parreira bringing home the big triumph. Tracy’s Brandon Riveira had battled his way to the lead at the halfway point but encountered issues that left him parked in the infield towards the waning circuits. After that Parreira ran smooth and consistent laps to cross the Tyler Carey checkered for the win. Colin Kirby came home in second, followed by Arizona racer Corbin Rueschenberg in third, 16th starter Austin Wood in fourth and Broedy Graham in fifth.

Delta Speedway track champion Lucas Mauldin picked up a closely contested Junior Sprint victory on Saturday night. Mauldin felt heat from Manteca’s Brody Rubio over the duration of the 25 lapper, in what was an entertaining feature. At the line the official margin of victory for Mauldin over Rubio read as 0.185 seconds. Tracy’s Kyle Fernandez earned the final spot on the podium with Pleasanton’s Kellan Harper and Bakersfield’s Blayden Graham completing the top-five.