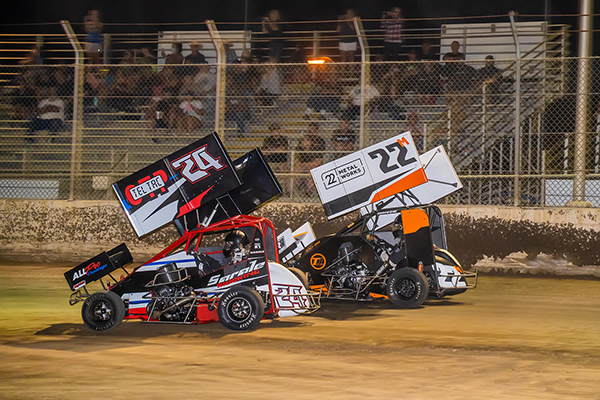 STOCKTON, CALIFORNIA (August 31, 2021) – Over $22,000 in cash awards await the Micro Sprint competitors in this weekend’s Hoosier Tire Dual at Delta Speedway presented by Financial Center Credit Union. Complete points races will be held both Saturday and Sunday nights for the drivers in Super 600, Non-Wing, Restricted, and Jr. Sprints. Features pay a guaranteed $500 to win in Super 600 and Non-Wing, $300 to win in Restricted, and $200 to win in Jr. Sprints. Each of the eight main events will pay $100 for tenth position. Photo by Maxwell Patrick

Support from sponsors such as Hoosier Tire, Elk Grove Ford, Southern Pacific Farms, and Roseville Precision will provide the lucrative points fund. Each division will pay down to fifth position with the Super 600 and Non-Wing champions each earning $1000. The Restricted high point driver earns $750 while Jr. Sprints will race for $350 for the Dual championship. Tarlton & Son will provide $100 hard charger prizes in each of the eight main events while Micro Sprint Mart pays $50 to the fast-time qualifier in all three qualifying divisions each night.

The 1/7th mile dirt oval at the San Joaquin County Fairgrounds in Stockton has had entertaining championship battles throughout the summer. Stockton’s Caden Sarale is aiming for his third consecutive sweep of both the winged Super 600 and Non-Wing 600 Micro Sprint divisions.

Following in the footsteps of his BCRA championship winning father John Sarale, Caden looks to cement his legacy as one of the winningest drivers in the 35 year history of the speedway. A strong performance over the dual weekend will aid in Sarale’s bid for a career-defining year. Both divisions compete in a 30-lap feature each night of the Dual.

Caeden Steele has won four features in Super 600 to move within 31-points of Sarale. Nikko Panella, Raio Salmon, and Alex Panella are in pursuit as well. In Non-Wing, the championship lead for Sarale stands at 69 markers over 2020 Restricted champion Brandon Riveira of Tracy. Oregon’s Austin and Ashton Torgerson and Dan Mognaga make up the balance of the top-five.

Manteca’s Brody Rubio leads the Jr. Sprints competitors in the standings with six wins, followed by Oakdale’s Hayden Stepps with two wins. Levi Osborne, Josiah Vega, and Vito Cancilla round out the top-five with 20-lap features on tap each night.

Car and driver entry is $50 each night for track members and $60 for non-members.