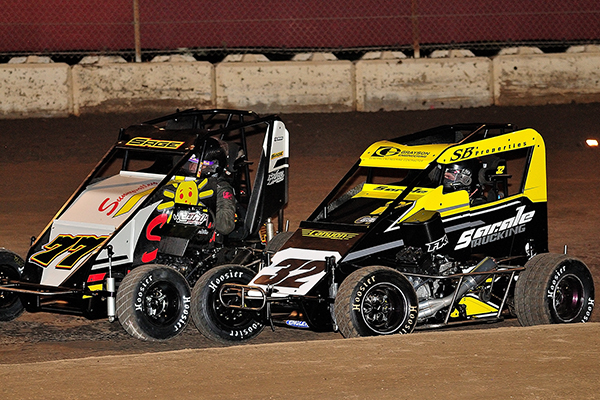 STOCKTON, CALIFORNIA (September 29, 2021) – Stockton’s Caden Sarale aims to wrap up his third consecutive championships in both Super 600 and Non-Wing during this Saturday’s Championship Night at Delta Speedway presented by Financial Center Credit Union. The final push for the $1,000-to-win titles will include all four Micro Sprint divisions with Jr. Sprints, Restricted, Non-Wing, and Super 600 capping their points seasons at the 1/7th mile dirt oval. Photo by Top Dawg Photos

Saturday’s events will include a raffle to raise money for Rylee Stephens. “Rocking and Racing for Rylee” includes great prizes such as gift baskets, five kids bikes, race car parts, a Hoosier Tire, an air tank, a $500 gift card for a race car wrap, and much more. All proceeds go to Rylee’s family to assist with her cancer fight.

Six total wins across the two featured divisions at Delta has been enough to give the 2019 and 2020 champion Sarale a comfortable cushion. In Non-Wing, Sarale’s advantage stands at 121 markers after a productive five-win campaign. Brandon Riveira has been sensational in his rookie effort. Riveira moved up to Non-Wing after winning the 2020 Restricted title. Despite no victories, his consistency has kept him in the second position throughout the year. Medford, Oregon’s Torgerson brothers of Austin and Ashton rank third and fourth with just 25-points between them. Austin Torgerson will look for his first Delta triumph of the year on Saturday. Valley Springs’ Dan Mognaga, the 2011 Non-Wing and 2012 Super 600 track champion, rounds out the top-five.

Sarale’s one win and nine top-fives in Super 600 gives him a 54-point lead over 2018 champion Nikko Panella of Stockton. Caeden Steele of Fresno has won four main events to place the 2018 Restricted champion in third. Raio and Mattix Salmon round out the top-five. Both Super 600 and Non-Wing race in 30-lap features for $500-to-win.

Five wins has pushed Jett Barnes of Visalia clear of Fresno’s Colton Key in the Restricted championship fight. Barnes leads Key by 28 points heading into the 25-lap finale which pays a minimum of $300-to-win. 2015 Jr. Sprints champion Isabel Barnes of Brentwood, Sacramento’s Austin Wood, and Castro Valley’s Andrew Smith round out the top-five.

Manteca’s Brody Rubio leads the speedway at the San Joaquin County Fairgrounds with eight wins in the Jr. Sprints, the youngest division at the speedway. He leads Oakdale’s Hayden Stepps by 55-points followed by Millbrae’s Levi Osborne, Antioch’s Josiah Vega, and Pleasant Hill’s Vito Cancilla. A 20-lap feature paying a guaranteed $200 to the winner is on tap.

Tickets are $10 for adults ages 13 and up, $5 for kids ages 6 to 12, seniors 55+, and military, and kids 5 and under are free! Pit Passes can also be pre-purchased by competitors for $20 or purchased at the gate. Pit gates open at 1pm with the driver’s meeting at 4:30 pm. Hot laps and qualifying will follow.