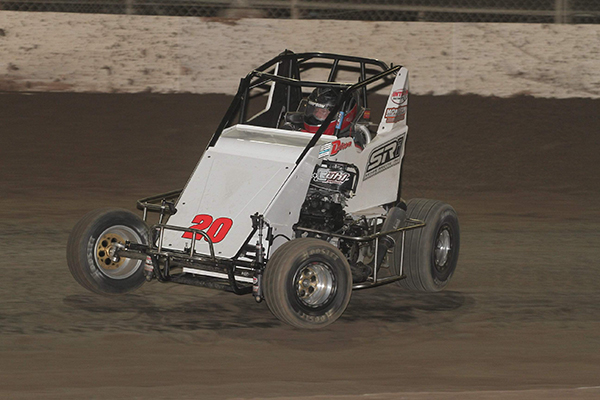 STOCKTON, CALIFORNIA (October 26, 2019) – Madera Ranchos’ Dalton Hill and Stockton’s Caden Sarale will be the polesitters for tonight’s Turkey Bowl XIXI $2,000 to win features, after winning Friday’s Knock Out races at Delta Speedway presented by Financial Center Credit Union. Hill and Sarale’s wins highlighted an outstanding night of competition with over 300 laps of racing and 116 cars competing.

Each driver competed in a pair of 10 lap heat races for points to set the Saturday championship lineups. The top 16 in points in both the Non-Wing and Super 600 were eligible for the pursuit-style Knock Out races. Fans in the stands competed in a pumpkin contest that helped set the number of cars that would compete. Non-Wing started 16 cars while Super 600 started 12.

The Non-Wing Knock Out lived up to the name with several early caution periods. 2017 track champion Tj Smith had an incident in turn one that bumped him back to the rear of the field. Jake Andreotti spun on a restart attempt while Josh Hurley and Oregon’s Ashton Torgerson failed to finish the first segment. After the first five laps, track champion Dan Mognaga was among the cars knocked out. Andreotti was among those bumped from the field in the second segment.

The third five lap segment saw Brandon Carey swoop past Smith at the finish to move into the final four and knock Smith from the running. A redraw on the front stretch placed 15th starting Hill on the pole for the final six lap sprint. Hill motored away from Mitchel Moles for the victory and Saturday’s pole position for the 40-lap Non-Wing feature. Moles topped Carey and Brandon Shaw as the top-four starters for tonight’s race.

A six-car final segment for ten laps saw 2019 track champion Caden Sarale on the pole after the redraw. Mitchel Moles drew third but knifed up into second position. Snohomish, WA’s Chance Crum spun on the final lap, setting up a one lap shootout between Sarale and Moles. Sarale held on for the victory followed by Moles, 2018 track champ Nikko Panella, Corey Day, Colton Huelsmann, and Crum for the top-six starting positions tonight.

Sarale will look to build on a dream season where he won both the Super 600 and Non-Wing championship in the same year. His two previous Turkey Bowl victories came during championship-winning years, perhaps as a harbinger for a big night tonight.

Restricted will stage a pole shuffle tonight among the top-six in points. Jade Avedisian leads after Friday competition ahead of 2019 champion Logan Trevino. They will be jockeying for the pole position for tonight’s $1,500 to win feature.

Jr. Sprints will be led to green tonight by Hayden Stepps of Oakdale in an outstanding Friday night performance. Only two drivers have won Jr. Sprints mains this year – Jett Barnes and Lucas Mauldin. They will start directly behind Stepps with Kellan Harper starting fourth for the $750 to win main event.

General admission tickets each night are $10 for adults, $5 for seniors, military, and children ages 6-12, and kids 5 and under are free!

Racing action will be streamed by Dirt Oval TV. Each night is $15 or $25 for a two-night pass. Visit www.DirtOvalTV.com to order in advance.