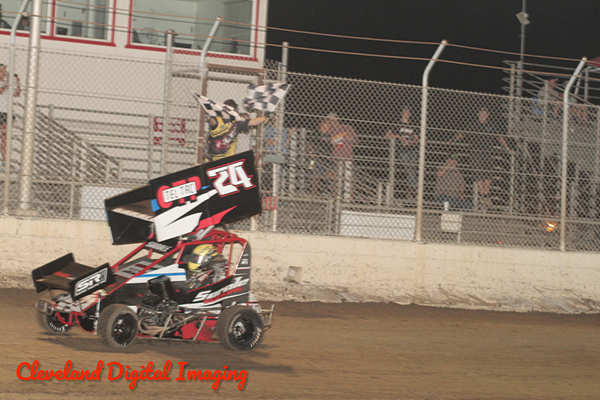 (September 6, 2020 from Gary Thomas) – The annual “Dual at Delta” kicked-off last night at the Delta Speedway and saw current point leader and defending track champion Caden Sarale of Stockton cap the evening by claiming victory in the Super 600 feature. Photo by Chris Cleveland

Sharing victory lane with Sarale on opening night were Tyler Smith in the Non Wing division, Taylor Mayhew in Restricted Sprints and Braxon Vasconcellos in Juniors.

The Super 600 main event started off fast and furious with the opening 16-laps clicked off caution free. The long green flag run allowed drivers to carve their way through lapped traffic and Sarale did a fabulous job to keep Rickey Sanders and the rest of the field at bay. Sanders would eventually encounter bad luck when contact left him slowing to the infield, relegating him to a 19th place result.

Fresno’s Caden Steele then became the largest challenger to Sarale over the later stages and did make it close at the end, but Sarale ran smooth and consistent to take the checkered flag. The official margin of victory read as a slim 0.397 seconds. Stockton’s Nikko Panella looked strong all night long and crossed the stripe in third with 18th starter James Andrichuk of Roseville having a fine run to finish fourth. Madera racer Logan Trevino rounded out the top-five.

Completing the top-10 in the 30-lapper were Gauge Garcia, Devon Courtnier, Brody Fuson, Travis Labat and Colton Huelsmann. Taking home wins in the Super 600 heat races were Travis Labat, Rickey Sanders and Brad Hannum. Fast time was set by Nikko Panella at a 9.265. A total of 26 cars competed at the event.

The Non-Wing feature was all about Fresno’s Tyler Smith, who dominated the 30-lap race to claim opening night of the “Dual.” After a few slowdowns early in the main event the final 14-circuits were completed without incident. Smith started from the inside of row two and charged into the lead by the time the field hit the backstretch. Caden Sarale was the biggest threat to Smith over the course of the contest, as he closed in after moving into second.

Sarale would encounter issues however, with just three-laps remaining and that left Smith with a large lead out front. Smith crossed the checkered flag by over four seconds to snag the win over Valley Springs’ Dan Mognaga, Bakersfield’s Brody Fuson, Alameda’s Kyle Mentch and Auburn’s Cody Gray, who started 15th on the grid. Rounding out the top-10 were Brandt Twitty, Cameron Paul, Austin Stone, Matt Sargent and Tucker Lacaze.

Winning heats with the Non Wing class were Sage Bordenave, Brandon Carey, Cameron Paul and Corey Day. Setting fast time with a lap of 9.973 was Brody Fuson. A total of 35 cars were on hand.

The Restricted feature saw a very happy first-time winner in the form of Bakersfield’s Taylor Mahew. The 25-lap contest began with Tulare’s Maverick Myrick taking command from the outside of the front row. Shortly after that however, contact between Myrick and Taylor Mahew off turn four left Myrick out of the race and brought out a red flag for third running Dalton Pereira. Pereira had nowhere to go after the leaders made contact and was sent upside down, but fortunately climbed out okay.

Another red flag on lap-six and a caution on lap-14 were the only things that could slow the fast moving Mahew down, who did a solid job out front. Tracy’s Brandon Riveira did close the gap over the closing circuits, but it was Mayhew that took the checkered for the big triumph. Riveira came home in second over point leader Mattix Salmon of Fresno; Mesa, Arizona’s Corbin Rueschenberg and Fresno’s Reilee Phillips, who charged from 18th starting.

The remainder of the top-10 was comprised of Broedy Graham, Cash Lovenburg, Isabel Barnes, Colin Kirby and Colton Key. Restricted heat races were captured by Dominic Carter, Colin Kirby and Barrett Polhemus. Quick time went to Drake Carter with a lap of 10.237. Twenty-two cars signed into the pit area during the night.

The Junior feature was a battle between front row starters Braxon Vasconcellos of Visalia and Linden’s Briggs Davis. The 20-lapper saw cautions and an early red flag slow things down, but the final half of the race was clicked off green to checkered. Vasconcellos led every step of the way and was able to fend off Davis to claim the opening night victory. Rancho Murieta’s Lucas Mauldin finished in third over Tracy’s Kyle Fernandez and Bakersfield’s Blayden Graham.

Action returns to Delta Speedway tonight with the conclusion of the “Dual at Delta.”