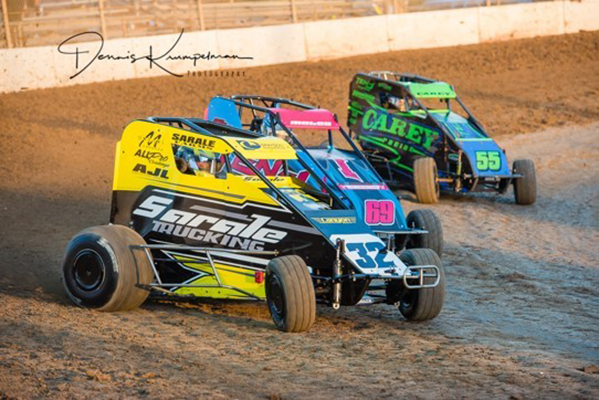 STOCKTON, CALIFORNIA (September 2, 2020) – The Micro Sprint teams of Delta Speedway presented by Financial Center Credit Union will toil their way through Labor Day Weekend, with two complete nights of competition on tap with the annual Dual at Delta. Both Saturday and Sunday nights will see all four divisions – Super 600, Non-Wing, Restricted, and Jr. Sprints – battling for coveted points towards the $1000 track championships. Photo by Dennis Krumpleman

Elk Grove Ford, C&P Promotions, and Forbidden Motorsports will offer an $800 cash award to any driver who can sweep both main events for their division as well. The racing at the 1/7th mile dirt oval at the San Joaquin County Fairgrounds in Stockton has been held with COVID-19 guidelines in affect. All attendees must purchase a pit pass and abide by health and safety protocols. A COVID waiver is mandatory for everyone who enters the facility. More information can be found at www.DeltaSpeedwayStockton.com

Defending Jr. Sprints champion Lucas Mauldin of Rancho Murieta and 2020 Restricted points leader Mattix Salmon of Fresno both facing increased pressure in their championship hunts. For Mauldin, he has raced toe-to-toe with Oakdale’s Hayden Stepps. Each driver has scored victory twice this season.

A new customer has emerged, with Tracy’s Kyle Fernandez earning his first Delta win on August 22nd. Mauldin leads Stepps by only two points, while Fernandez is just eight points out of the championship lead. Manteca’s Brody Rubio has a win this season as well and remains within striking distance at just 15 points out of the lead. Kellan Harper rounds out the Jr. Sprints top-five. Jr. Sprints will race for 20-laps each night of the Dual with a minimum of $200 offered to the winner each night.

Tracy’s Brandon Riviera was also a first time Delta winner two weeks ago, with his victory placing him within 15 points of Salmon in the Restricted championship. Colin Kirby of Pleasanthill is a scant 18 points behind in third ahead of Brentwood’s Isabel Barnes and two-time 2020 winner Austin Wood of Sacramento. This weekend’s pair of 25-lap features could change the championship picture, and each will pay a guaranteed $300 to the victor.

Stockton’s Caden Sarale is attempting to complete a feat unseen at Delta, looking to sweep the Super 600 and Non-Wing championships for the second consecutive season. The last driver to win back-to-back Non-Wing titles was Valley Springs’ Dan Mognaga, who won both the 2010 and 2011 crowns before adding a 2012 Super 600 title.

Ryan Rusconi won consecutive Super 600 championships in 2008 and 2009, while Rick DeCosta earned the accomplishment over 2003 and 2004. But no driver has won four championships across a two-year span, according to the available records for the 34-year-old speedway.

Sarale leads Non-Wing by 61 points over 2018 champion Tj Smith of Fresno, who has “Parked It” in victory lane twice this year. Sage Bordenave’s transition to wingless action has succeeded from third in the standings ahead of Brentwood’s Blake Bower and former champion Brandon Carey of Ripon.

Sarale has three wins in his Super 600 effort this season to lead Fresno’s Raio Salmon by 50 points. 2014 champion Travis Labat, 2018 champion Nikko Panella, and Rickey Sanders of Watsonville round out the top-five. Both Super 600 and Non-Wing will battle for 30-lap features each night of the Dual, with $500 to win each feature.
Pit gates open at noon both days with the driver’s meeting at 4:30 pm and hot laps to follow. Come hungry as Royce Farms will be serving up their legendary race track BBQ for this competitor-only event.