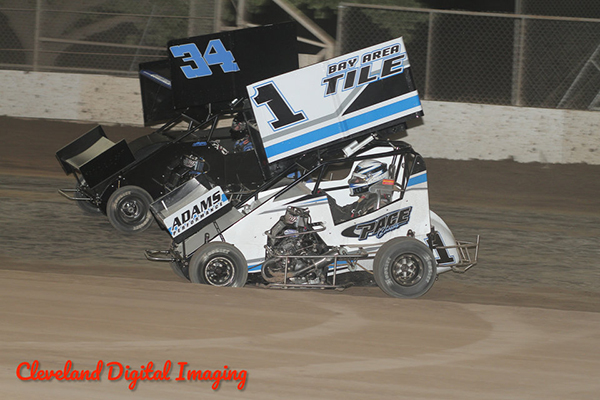 STOCKTON, CALIFORNIA (August 18, 2020) – It is time for another round of the summer of speed at the San Joaquin County Fairgrounds with the sixth points race for the Delta Speedway presented by the Financial Center Credit Union this Saturday night. Drivers in the four Micro Sprint divisions of Super 600, Non-Wing, Restricted, and Jr. Sprints dart around the 1/7th mile with dirt flying, open-wheel excitement. Photo by Chris Cleveland

All the excitement has taken place behind closed doors, however, as the events are closed to spectators with COVID-19 guidelines in affect. All attendees must be attending with a race team, with each team limited to ten people per car. A COVID waiver is mandatory for everyone who enters the facility. More information can be found at www.DeltaSpeedwayStockton.com

Teams compete for the highly sought after $1000 track championships, but also for the love of the sport. The young drivers in Jr. Sprints and Restricted are providing the tightest battles this season.

Brody Rubio drove into the winner’s circle with his first Delta win in round five, breaking the stranglehold that Oakdale’s Hayden Stepps and Rancho Murieta’s Lucas Mauldin have had on the division. Stepps finished third in the feature ahead of the 2019 champion Mauldin in fourth. Stepps sees herself just four points clear of Mauldin with 2019 runner-up Kyle Fernandez running 22 points behind in third. Rubio is 24 markers out of the lead from the fourth position with Kellan Harper rounding out the top-five. 20-laps and a minimum of $200 for the winner awaits the speedway’s youngest challengers.

“Big A” Austin Wood has been on a run throughout the Northern California Restricted scene, including two wins at Delta Speedway in his four starts this year. But until the throwaway races are factored in, Wood ranks sixth in the 2020 standings. The points lead is held by Mattix Salmon of Fresno, still looking for his first Delta Restricted win after finishing third in the previous round. Round three winner Colin Kirby is second in the points ahead of former Jr. Sprints champion Isabel Barnes of Brentwood. Brandon Riveria and Reilee Phillips make up the balance of the top-five. The Restricted competitors will battle for 25-laps and a guaranteed $300 to win.

Caden Sarale of Stockton is backing up his 2019 sweep of the Super 600 and Non-Wing championships by leading both series again in 2020. His father went back-to-back as the BCRA Midget champion in 2005 and 2006, proof that back-to-back successful seasons run in the family.

Sarale then won the Super 600 nightcap later that evening, winning from the pole position ahead of another 2018 champion in Nikko Panella of Stockton. Sarale leads the Super 600 battle by 35 points ahead of Raio Salmon with 2014 champion Travis Labat in pursuit from third. Rickey Sanders and Panella make up the rest of the top-five with Alex Panella of Stockton in sixth within striking distance as well.

Pit gates open at noon with the driver’s meeting at 4:30 pm and hot laps to follow. Come hungry as Royce Farms will be serving up their legendary race track BBQ for this competitor-only event.