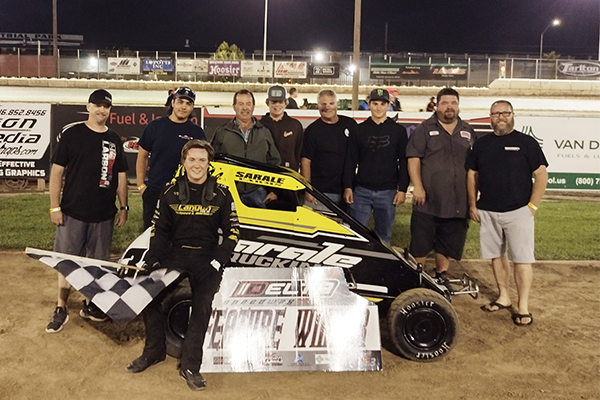 STOCKTON, CALIFORNIA (September 15, 2021) – Stockton’s Caden Sarale gave a high-five to the Non-Wing field as he looks to close out his third consecutive Delta Speedway championship, going to the high side for his fifth $500 triumph of the season on Wednesday. Sarale’s victory at the 1/7th mile presented by Financial Center Credit Union was part of a special Wednesday Night race at the San Joaquin County Fairgrounds.

Brian Gilbert of Visalia led the first three laps of the 30-lap feature. The race stopped on lap three with Pleasant Hill’s Colin Kirby and Ripon’s Randy Sims going upside down on the front stretch for a red flag. The upside down action continued during the restart when Robbie Lewis flipped in turn four.

Sarale jumped inside of Gilbert to challenge for the lead and was credited with the position on lap five. The race went red for the third time when Jeffrey Pahule, Jr. of Brentwood hit the turn two wall head on. Ashton Torgerson of Medford, Ore. looked inside to try to advance from fourth while Tracy’s Brandon Riveira tried to advance from fifth on the outside. Their side-by-side battling took place in front of 2018 champion Tj Smith of Fresno.

The race went green the rest of the distance with Sarale topping Gilbert, Valley Springs’ Dan Mognaga, Torgerson, and Smith at the checkered flag.

Jett Barnes of Visalia also used the outside line to score his fifth win of the year in Restricted in the 25-lap main event.

TK O’Brien of Manteca took off with the lead in the feature with the unrelated drivers of Brentwood’s Isabel Barnes and Jett Barnes in pursuit. Isabel went to the outside to lead lap six and brought Jett with her. The duo went side-by-side for several laps with a few crossover moves. Jett eventually settled on running the top and found himself still pursuing Isabel by lap 12. The incredible side-by-side formation ended on lap 16 when Jett Barnes edged Isabel at the stripe.

Hanford’s Michael Faccinto made a strong return to Micro Sprint racing, holding off Super 600 points leader Caden Sarale for the $500 win in the 30-lap feature. Faccinto went around the outside of Jeffrey Pahule, Jr. to lead the opening lap of the main event. Fresno’s Cody Key and Elk Grove’s Devon Courtnier had a crossover battle for third before Key earned the spot on lap four.

Clovis’ Jade Avedisian spun in turn one for the first caution on lap four. The top two in the championship, Sarale and Nikko Panella of Stockton, worked to overcome their third row starting positions. Kingsburg’s KJ Snow slowed exiting turn four and collected Courtnier for a caution on lap 18.

Sarale overhauled Key for second on the restart. Sarale then ran down Faccinto with six to go. Coming to the finish, Sarale dove inside Faccinto in turn three and rode up on two wheels on the berm. Faccinto held on for the win over Sarale, Key, Caeden Steele of Fresno, and Panella.

Manteca’s Brody Rubio led all 20-laps for his eighth $200 Jr. Sprints win of 2021. Rubio encountered lapped traffic by lap 11 and was challenged by lapped car Nathan Fernandez. Fernandez went airborne off the inside berm then lost his right rear wheel, rolling to a stop in turn two for the race’s only caution on lap 14.

Incoming second in points Hayden Stepps of Oakdale charged from sixth to third on the restart but couldn’t close on Rubio and second place running Vito Cancilla of Pleasant Hill. Millbrae’s Levi Osborne and Jackson Tardiff of Vacaville rounded out the top-five.