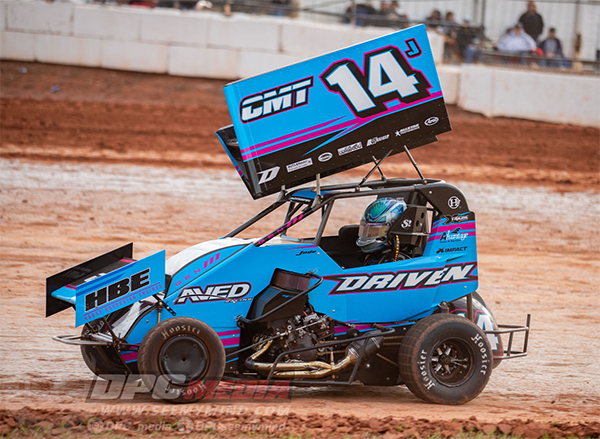 Three days of action were on tap for the 13-year-old Tulsa Shootout champion, competing in Restricted and “A” Class in the 4th annual Oil Capital Clash.

Avedisian led from the pole position in Friday’s Restricted feature with pressure from Nathan Benson. Benson took the lead in lapped traffic, but Avedisian used the outside line to take the position back on a restart. Avedisian drove ahead with the lead through a series of restarts, before rainfall ended the feature under caution with the #14 Driven Chassis on top. Avedisian won heat races in both the Restricted and “A” Class divisions, then finished seventh in the Friday feature for the “A” Class which delayed to Saturday afternoon.

In Saturday’s night program, Avedisian used the top side in the Restricted main event to move forward. She overcame a ninth starting position in the main event to charge to a third-place finish.

Her Thursday night performance in the Winged “A” Class also turned heads. Avedisian started 12th in the feature but advanced to sixth at the finish. In six main events over the weekend, the Lemoore Raceway and Plaza Park champion scored four top-ten finishes and a victory against tough national competition. She currently ranks second in the NOW600 Restricted standings, trailing Benson by just six points. The performances have also placed Avedisian second in the NOW600 A Class standings, trailing just Midwest legend Frank Flud in the championship.

Avedisian will continue to compete in the region in two weeks when she joins the Texas region of the NOW600. She will race at Monarch Motor Speedway in Wichita Falls, TX on March 27th followed by Superbowl Speedway in Greenville, TX on March 28. Her California season is still to be determined based on track scheduling due to the current virus pandemic.