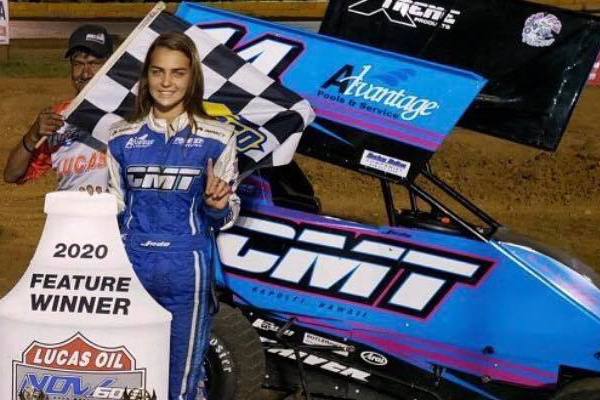 (May 26, 2020) – Jade Avedisian of Clovis, Calif. took over the points lead in both Restricted and A-Class in the National Open Wheel 600 Series over the weekend, scoring three main event victories including her first career A-Class feature win at Nevada Speedway in Nevada, MO. She swept the action at Nevada by also winning the Restricted main event. She also added a victory in Restricted on Friday night at KC Raceway in Independence, MO.

Driving the #14 Driven Chassis, Avedisian saw 11 checkered flags in 2019. Taking her show on the road in 2020 to find races, the 13 year-old has six victories to her credit including the Tulsa Shootout and four NOW600 Restricted wins.

Avedisian looked poised to sweep the action at KC Raceway on Friday. She won her A Class heat race and finished second in the Restricted heat race. She led all 20 laps in the Restricted feature with a 1.5 second advantage at the finish. In A Class, Avedisian took over the lead on lap seven. Trouble struck on lap 15 when she spun after contact heading into turn one. She came back to finish tenth, however.

A-Class on Sunday was the site of one of Avedisian’s biggest wins of her career. She won her heat race and lined up on the outside pole for the main event. Driving to victory, Avedisian took her first career win in the tough division while also taking over the national points lead in the process.

Buoyed by the weekend success, Avedisian will tackle the Super 600 AKA Outlaw division this weekend for the four race Turnpike Challenge. She will compete at Creek County Speedway on Thursday, then Friday and Saturday at I-44 Speedway. Sunday’s finale for her debut weekend in the Super division will be at Port City Raceway in Tulsa, OK.

Avedisian leads the national standings in both A-Class and Restricted as the NOW600 series takes a break until the Sooner 600 Week, June 10-14. The five-night extravaganza sees Micro Sprints compete across Kansas and Oklahoma for national points and the Sooner 600 Week championships. 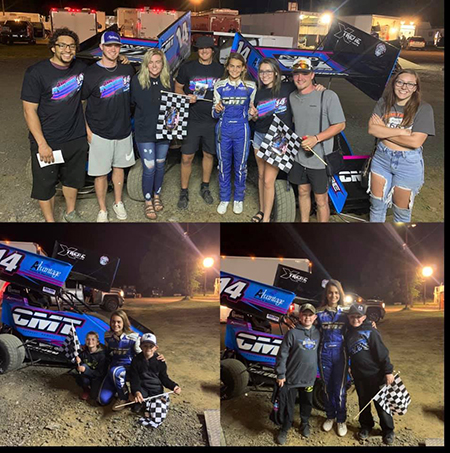