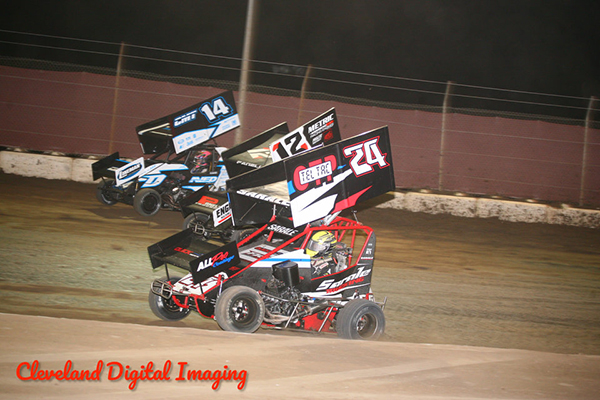 STOCKTON, CALIFORNIA (September 29, 2020) – The 34th season of championship dirt racing at Delta Speedway concludes on Saturday night in Stockton with four champions to be crowned at the 1/7th mile oval. The Financial Center Credit Union-sponsored track at the San Joaquin County Fairgrounds will pay $1,000 to the champions of Super 600, Non-Wing, Restricted, and Jr. Sprints. Photo by Chris Cleveland

Each driver competing for the championship will have one throw-away race. The throw-aways are not yet officially calculated until after the final event.

Stockton’s Caden Sarale will close out his second consecutive sweep of the Super 600 and Non-Wing championships in an unprecedented feat at the speedway. The season will end with Sarale enjoying six career championships, unofficially second only to Rick DeCosta’s eight career titles in the available track history records.

The 17-year-old Sarale has won seven features in 2020 including four in Super 600 and three in Non-Wing. In Non-Wing, Sarale has won the last two main events to distance himself from 2018 champion Tj Smith in the championship. French Camp’s Sage Bordenave, Chico’s Austin Stone, and 2016 Non-Wing & Super 600 champion Brandon Carey of Ripon round out the top-five. Saturday’s Non-Wing competition will see 30 laps for $500 to win.

In the Super 600, Sarale is a perfect nine-for-nine in top-five finishes. Second in points is again held by a 2018 champion, this time fellow Stockton resident Nikko Panella. 2014 champion Travis Labat of Livermore rounds out the trio of Super champions at the front of the points. Three-time track champion Alex Panella ranks fourth ahead of Caeden Steele of Fresno. Steele enters Saturday’s event after winning his first Delta Super 600 feature last weekend. Steele will try for another 30-lap, $500 victory.

Tracy’s Brandon Riveira added his second triumph of 2020 last Saturday night to enjoy a 34-point advantage over Fresno’s Mattix Salmon when the throw-away is included. Salmon has six top-fives this year but still needs a win. Colin Kirby of Pleasanthill is 42 out of first including the throw-away race. 2015 & 2017 Jr. Sprints champion Isabel Barnes and Reilee Phillips round out the top-five. Saturday’s 25-lap championship finale pays a minimum of $300 to win.

The championship duel in Jr. Sprints is far from over as defending champion Lucas Mauldin has used three wins to move to a two-point lead over Kyle Fernandez. Fernandez is the most recent winner, however, with the Tracy, CA driver trying to grab the championship over the final weeks. Brody Rubio is third in the standings ahead of Hayden Stepps and Peyton Whitehouse. The Jr. Sprints compete for 20-laps for a guaranteed $200 to win.

Pit gates open at noon with the driver’s meeting at 4:30 pm and hot laps to follow. Come hungry as Royce Farms will be serving up their legendary race track BBQ once again!