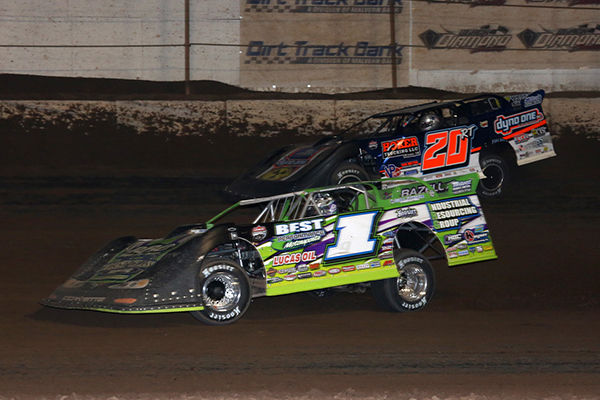 (January 16, 2021 from Aaron Clay) – There are some nights where it is extremely difficult to put into words how good the racing was, or how a race transpired. Round four of the 15th Annual Keyser Manufacturing Wild West Shootout presented by O’Reilly Auto Parts was one of those nights.

Jonathan Davenport of Blairsville, Ga., continued to assert himself as the man to beat in the Dirt Track Bank Super Late Model division, presented by Black Diamond Race Cars. After winning on Wednesday night, Davenport picked right back up where he left off and set the quickest overall lap time in qualifying, laying down a 14.535 around FK Rod Ends Arizona Speedway. Just like the quick qualifiers before him, Davenport earned the inside front row starting position for his heat race and was also awarded the $100 SportTruck RV Fast Time Award presented by Screven Motor Speedway. However, Davenport’s 14.535-second lap on Friday was not enough to unseat Ricky Thornton Jr.’s 14.525-second lap, which he set on Wednesday. Thornton Jr., of Chandler, Ariz., remains in control of the Premier Waste Services Shock the Clock program, which will pay a $1,000 bonus to the Super Late Model driver who sets the quickest overall qualifying lap, throughout the entire six race miniseries.

Davenport won his heat race handily later in the evening, ensuring himself a spot in Friday’s $5,000-to-win feature, also earning a spot in the Schaeffer Oil redraw. Jared Landers of Benton, Ark., Tyler Erb of New Waverly, Texas, Ricky Thornton Jr., Mike Marlar of Winfield, Tenn., and Jason Papich of Arroyo Grande, Calif., joined Davenport as heat race winners, along with joining him in the redraw. Landers drew the “number one” Schaeffer Oil can, earning himself the $100 Gorsuch Performance Solutions Pole award, meaning he would start the 30-lap Dirt Track Bank Super Late Model main event from the inside front row.

With the stage set, Jason Papich wasted no time blasting around the outside of Jared Landers, in the first set of turns, bringing Ricky Thornton Jr. with him. An unfortunate spin by Mike Marlar brought out the first Midwest Sheet Metal caution flag just one lap later. Marlar was able to continue, but pulled into the infield just a few laps later, ending his night in 24th. When the C&D Bonding green flag waved on the restart, Papich continued to enjoy a healthy lead over Thornton Jr. until they began to encounter lapped traffic on lap 10. Papich did everything he could to pass the lapped cars as efficiently as possible, but Thornton Jr. could smell blood in the water and knew this was his time to pounce.

As Papich and Thornton Jr. battled for the lead, while also negotiating their way through lapped traffic, Tyler Erb was closing in and began stalking the two leaders, like a lion stalks their prey. Erb found his time to strike on lap 12, when he decided to make a daring three-wide pass for the lead, splitting Papich and Thornton Jr. off of the second turn. Thornton Jr. was able to keep pace with Erb and they battled for the lead until the second caution flag was displayed on lap 17, when Papich made contact with Jonathan Davenport and suffered a flat left front tire. Papich’s team was able to replace the deflated Hoosier, but he was forced to restart at the back of the field and was only able to mount a charge to finish 14th.

A rash of Midwest Sheet Metal caution flags followed the lap 17 restart, with Johnny Scott of Las Cruces, N.M., and Chris Simpson of Oxford, Iowa each spinning during separate incidents on consecutive restart attempts. Simpson was unable to continue and finished 21st, while Scott rebounded to finish 17th. Thankfully, this was the last time the Dirt Track Bank Super Late Model feature would be slowed by incident and the final 13 laps were some of the best I have ever seen, in my life.

Tyler Erb continued to flex his muscle on the restarts, easily putting a few car lengths on Thornton Jr., but Ricky remained within striking distance of Erb. For what seemed like at least five consecutive laps, Erb and Thornton Jr. traded slide jobs like a couple of professionals. Thornton Jr. would drive deep into turn one and slide up in front of Erb, who was running the cushion. Knowing that Thornton Jr. was coming, Erb would turn down off the wall and get a drive underneath Ricky at the exit of turn two, allowing him to beat Thornton Jr. into turn three and slide up in front of him. The two continued this slide job exchange for several laps and they did it cleanly, without making contact. Jonathan Davenport remained in third position and was licking his chops, hoping the two would make contact and potentially open the door for him.

It was not to be for Thornton Jr. or Davenport, however, as they both faded in the closing laps, unable to keep pace with Erb. “Terbo” cruised to claim the $5,000 triumph on Friday, finishing 1.380 seconds ahead of Thornton Jr., who narrowly nipped Davenport at the line, for second place. Bobby Pierce of Oakwood, Ill., and Stormy Scott of Las Cruces, N.M., completed the top-five finishers.

The Mesilla Valley Transport and Border Tire Modifieds presented by Arizona Differential had an extremely tough act to follow, after the epic slide job show that was displayed during the Super Late Model feature, but they were up to the task.

Tyler Wolff of Fayetteville, Ark., took advantage of his inside front row starting position and easily jumped out to lead the 25-lap feature. He proceeded to lead the race’s first 13 circuits, but continually felt pressure from Logan Drake of San Luis Obispo, Calif., Calvin Iverson of Eleva, Wis., and Tyler Peterson of Hickson, N.D. At one point, all four drivers were under a blanket and battling for the lead, before Rodney Sanders of Happy, Texas brought out the first caution on lap six. Sanders was able to continue and rebounded to finish 13th on Friday.

Three Midwest Sheet Metal caution flags flew between laps seven to 11, all for separate incidents. Tyler Peterson successfully worked his way around the outside of Wolff, to claim the lead on lap 11, only to have his efforts thwarted by the fourth caution flag of the race. This allowed Wolff to see Peterson pass him on the outside, before regaining the lead when the race reverted to the previously completed lap, relegating Peterson back to the runner-up position.

It didn’t matter, as Peterson continued running the high line to perfection around FK Rod Ends Arizona Speedway and he officially completed the pass on Wolff, on the 14th lap. Wolff tried to run the high line himself and appeared to begin reeling Peterson back in for the lead, only to jump the narrow cushion and hit the wall, giving him a flat right rear tire in the closing laps. Wolff limped around for the last few laps and was credited with finishing 15th, a position not indicative of his performance.

The first of four Midwest Sheet Metal caution flags flew on lap 12, when Avery Anderson of Alexandria, Minn., spun in turn four. The ensuing restart set off a chain of events that would claim three of top-five competitors and end their chances for victory. Andy Bryant of Fort Scott, Kan., executed a perfect restart, gaining the runner-up position from Kakela and he began to gain on Hale for the lead. Bryant and Hale battled for the top spot, but the two made contact at the exit of turn four on lap 13, causing both of them to spin on the narrow front stretch of FK Rod Ends Arizona Speedway. Somehow, Kakela, Preston Carr of Carrington, N.D., and Lance Schill of Langdon, N.D., were able to sneak past the spinning leaders, only for several cars to pile into Bryant and Hale, behind them.

Thankfully, all drivers were okay, but the red flag was displayed, giving track crew time to clean up the multi-car incident. Hale and Bryant were unable to continue, resulting in 17th and 18th place finishes for them, respectively. Bryan Kakela inherited the lead again, with Carr and Schill directly behind him. Having won on Wednesday night, Preston Carr was seeking his second win in as many races, but he experienced trouble of his own on the ensuing restart. Much like the leaders on the previous lap, Carr also spun at the exit of turn four, in front of nearly the entire field. Somehow, everyone avoided Carr, but another multi-car crash ensued, ending the night for points leader Shane Sabraski of Rice, Minn., along with round one winner, Jory Berg of Grand Forks, N.D. Carr was able to continue and finished 11th.

With the 11:30pm local curfew looming, Keyser Manufacturing Wild West Shootout officials decided to shorten the RHRswag.com X-Mod feature to only 15 laps. However, another crash occurred on the final restart attempt and the decision was made to display the caution and checkered flags together, giving Lance Schill his first victory of the week and collecting $500 in the process. After leading the first half of the race, Kakela settled for second place on Friday, with Scott Bintz of Jamestown, N.D., Cole Searing of Huron, S.D., and Rob Moseley of Los Lunas, N.M., rounding out the top-five.