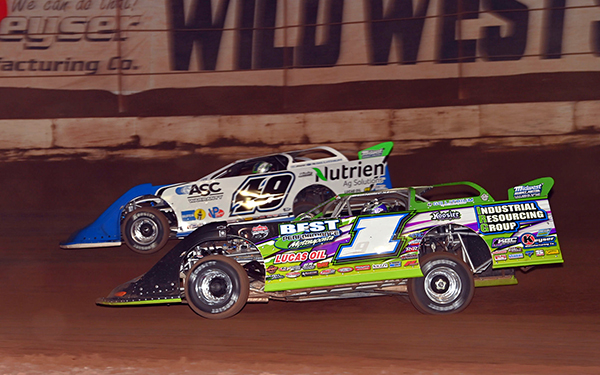 With group qualifying taking place earlier in the afternoon on the weekend shows, Pierce’s time was considerably slower than the quickest lap set this week by Ricky Thornton Jr. of Chandler, Ariz., who earned the same honor on Wednesday, when he ran a 14.525-second lap. Thornton Jr. has all but clinched the Premier Waste Services Shock the Clock program, which will earn him an additional $1,000 if his lap is still the quickest of the miniseries, after tomorrow.

Just like Thornton Jr. and all other quick qualifiers this week, Pierce earned the inside front row starting position for his heat race and used the preferred starting spot to his advantage. Pierce traded slide jobs with Jason Papich of Arroyo Grande, Calif., cruising to win his heat race and earning him a spot in the Schaeffer Oil redraw, where he would be given a chance to draw for his starting position in the upcoming 40-lap, $5,000-to-win main event. Thornton Jr., Terry Phillips of Springfield, Mo., Jimmy Mars of Menomonie, Wis., Tyler Erb of New Waverly, Texas and Jonathan Davenport of Blairsville, Ga., joined Pierce as heat race winners, meaning they would also join him in the redraw.

The Schaeffer Oil redraw was completed in front of the main grandstands at FK Rod Ends Arizona Speedway and broadcasted live on Flo Racing. Being the winner of heat race one, Pierce was given the opportunity to draw his spot first and he successfully picked the “number one” Schaeffer Oil can. Not only did this result in Pierce starting on the pole for the upcoming feature, but he also earned the $100 Gorsuch Performance Solutions Pole award.

Unfortunately for Pierce, he was unable to lead a single lap during the Dirt Track Bank Super Late Model feature, as Jonathan Davenport utilized his outside front row starting position and fired-off to the early race lead. Davenport led the first five circuits before Friday night’s winner, Tyler Erb, made quick work of him at the exit of turn four. By this point, the field was beginning to spread out and the leaders began to hit lapped traffic.

Pierce’s night ended just a few laps later when he slowed at the exit of turn two and pulled into the infield, on lap 10. Pierce was unable to continue and credited with finishing 24th. Meanwhile, Saturday night’s race continued clean and green, with Erb leading over Davenport by a little over one second. Jimmy Mars was a distant third place at the race’s halfway mark and under heavy pressure from Ricky Thornton Jr. and Jason Papich.

It seemed that “Superman” Jonathan Davenport was simply biding his time as he began to close in on Erb, while Tyler was stuck in lapped traffic. Davenport found his moment to strike, passing Erb for the lead at the entrance of turn one, on lap 30. “Terbo” quickly turned underneath Davenport, attempting a cross-over move, but he was unable to make it stick and could only watch as Davenport began to pull away. The folks at Keyser Manufacturing were all but counting the $10,000 bonus that Davenport seemed destined to collect, but Erb had other plans.

With both drivers still negotiating their way through lapped traffic, Erb ran the high line perfectly on lap 36 and generated a huge run on Davenport down the back stretch. Not one to waste momentum, Erb turned that drive into a huge slide job at the entrance of turn three, easily clearing Davenport all the way to the cushion and taking the lead. Davenport hopped the cushion and appeared to scrape the wall with his right rear quarter panel, killing his momentum. Erb kept digging and quickly lengthened the gap between him and Davenport, with three laps to go.

Both drivers continued to weave through lapped traffic, allowing Davenport to close back in on Erb. However, Davenport didn’t quite have enough in the closing laps and settled for nearly getting alongside Erb at the exit of turn four on the last lap, coming up just short at the line. Saturday’s victory marks the second consecutive for Tyler Erb, boosting him into a six-way tie for 16th on the all-time Keyser Manufacturing Wild West Shootout wins list. Erb’s second $5,000 payday in as many days was earned by 0.122 seconds over Davenport, who settled for the runner-up position. Almost more impressive, Ricky Thornton Jr. charged to finish third, 0.942 seconds behind Erb and appeared to need just a few more laps in order to contend with the two race-long leaders. Jimmy Mars and Jason Papich rounded out the top-five finishers.

While Saturday’s Super Late Model feature didn’t have as many slide jobs or lead changes as Friday’s main event, it certainly entertained in other ways. To start, all 40 laps were completed under the C&D Bonding green flag and lasted just over 10 minutes. There were four official lead changes between Erb and Davenport, with two happening inside of the last 10 laps and the final lead change occurring with three laps to go. Lastly, the top three finishers were all within one second of each other, even after 40 straight green flag laps. For the second consecutive night, Billy Moyer Sr. advanced the most positions in the Dirt Track Bank Super Late Model division presented by Black Diamond Race Cars. “Mr. Smooth” started 23rd and finished 11th, earning the $500 Premier Waste Service Hard Charger award.

The Mesilla Valley Transport and Border Tire Modifieds presented by Arizona Differential had another tough act to follow on Saturday, but they were up for the challenge. To begin, their parade laps featured each driver holding old glory out of their driver’s side window; a patriotic display that is always a sight to behold. Once the race got going, outside pole sitter Clint Johnson of Neosho, Mo., led the opening laps. The first Midwest Sheet Metal caution flag flew on lap eight, when Calvin Iverson of Eleva, Wis., tangled with Carlos Ahumada Jr. of El Paso, Texas between turns one and two.

Friday night’s winner, Tyler Peterson of Hickson, N.D., took advantage of the restart opportunity and blasted around the outside of Johnson, to claim the lead on lap nine. However, Peterson’s time out front was short-lived, as sixth place-starting Rodney Sanders of Happy, Texas, worked his way around Peterson for the lead, on lap 11. Sanders continued to stretch his lead over the field until lap 21, when the second Midwest Sheet Metal caution flag was displayed after Dustin Strand of Grand Forks, N.D., made contact with Jayson Good of Watertown, S.D., while the two were battling for third place. Good’s spin relegated him to the back of the field and he finished 18th.

The ensuing four lap shootout was anticlimactic, as Sanders ran away in the closing laps, winning by 2.364 seconds over Peterson, with Strand coming home in third. After leading early and running in the top-five all race, Clint Johnson capped his solid night with a fourth place finish, while Lucas Schott secured the $100 Schill Construction Hard Charger award after starting 22nd and completing the top-five finishers on Saturday.

The RHRswag.com X-Mods presented by Barnett Harley-Davidson held a rough and tumble 25-lap feature on Saturday, a race that was slowed by seven Midwest Sheet Metal caution flags. Preston Carr of Carrington, N.D., earned his second win of the week, after powering around race-long leader, Gabe Hodges of Lebo, Kan., on a mid-race restart. The biggest incident took place on lap 21, when Jory Berg of Grand Forks, N.D., Parker Hale of Grand Meadow, Minn., and Josh Cain of Rio Rancho, N.M., all tangled between turns one and two. Unfortunately for Berg and Hale, the incident ended their nights and they were credited with finishing 12th and 14th, respectively. Cain finished 9th.

Just like the Modified feature, the four lap sprint to the finish was rather uneventful, as Preston Carr left all challengers in his dust. Carr claimed his second RHRswag.com X-Mod feature victory of the week by 2.277 seconds over Tyler Mecl of Queen Creek, Ariz. Friday night’s winner, Lance Schill of Langdon, N.D., finished third on Saturday, while Kelly Hagel of Carrington, N.D., and Hodges completed the top-five finishers.

The 2021 Keyser Manufacturing Wild West Shootout presented by O’Reilly Auto Parts concludes on Sunday, January 17th, with cars scheduled to hit the track for hot laps at 3:30pm local time (5:30pm eastern). The night is headlined by the Shaw Trucking 50 presented by Premier Waste Services, which posts a $25,000 top prize.