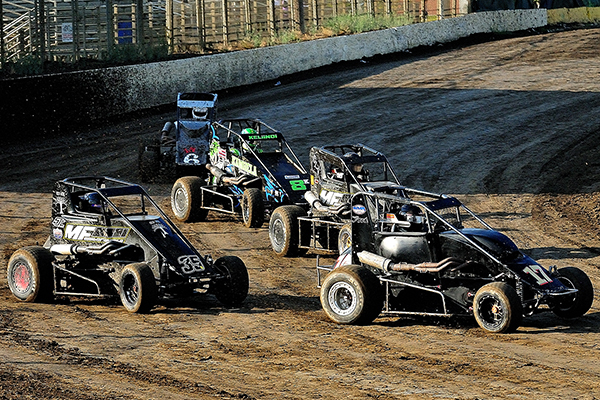 WATSONVILLE, CALIF. (Sept. 10, 2021) – Three September races await the drivers battling for the Western Midget Racing presented by Masters Design and Construction championship, beginning this Saturday at Ventura Raceway. The stock production-powered Midgets then return to Glendale, Ariz. at Adobe Mountain Speedway on Sept. 18 before their debut at Antioch Speedway on Sept. 25. In total, WMR will compete on six consecutive weekends through October 16 at Ventura, with the close title fight between Brentwood’s Blake Bower and Fresno’s David Prickett as the focal point. Photo by Top Dawg Photos

Western Midget Racing will be joined on Saturday night by USAC Western Midgets, VRA Sprints, IMCA Mod Lites, Hobby Stocks, and IMCA Sport Mods at the dirt track along the Pacific Ocean. The full night of racing from Ventura will stream live on FloRacing.com

Bower leads Prickett by just eight points in the championship heading into the busy stretch of racing. Each driver has made 14 starts with their best 12 counting in the championship order. Santa Paula’s Megan Moorhead ranks third in the no. 20w for Pasillas Tire Service, just 62-points out of the lead. Peoria, Ariz.’s Cory Brown in his no. 32 Ripper Chassis and Hawaiian Kala Keliinoi round out the top-five.

WMR racers are required to make two starts each at Ventura and Watsonville’s Ocean Speedway, and one start each at Petaluma and Adobe Mountain to be eligible for the series championship. Bower is the only driver in the top-five yet to visit Adobe Mountain, with a trip planned later this fall.

Bower has won twice at Ventura this year while Prickett and Herald’s D.J. Freitas are the other winners at the speedway this year. The four rounds have averaged 15 cars per event including the first two featuring 18 competitors.

More details for this weekend’s races are available at www.VenturaRaceway.com