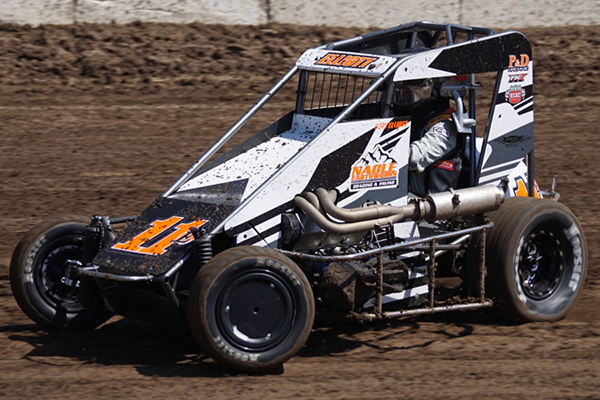 (September 29, 2020 from Lance Jennings) – This Saturday, October 3rd, the “mighty midgets” of the USAC Western States and Bay Cities Racing Association will battle at Petaluma Speedway. Promoted by Rick Faeth, the co-sanctioned special event / non-point race will also feature Dwarf Cars, 600 Micro Sprints, and Mini Stocks. The Pit Gates will open at noon, the GRANDSTANDS ARE CLOSED, Practice starts at 5:00pm, and Racing at “The Fastest 3/8 Mile Dirt Oval in Northern California” will begin at 6:00pm. For event information, visit the track’s website at petaluma-speedway.com or call 707.763.7223 (RACE). Floracing.com will broadcast a pay per view live stream over the internet. Photo by Lance Jennings

Originally cancelled on September 6th from a request by the Mayor of Petaluma and City Manager, Saturday’s show will be the first of two “West Coast Stock Car / Motorsports Hall of Fame Challenge” races. Extra prize money will be up for grabs to the top-five drivers in points from the October 3rd and 24th events at Petaluma. The mini-series will pay $1,000-to-win, $700-for-2nd, $500-for-3rd, $350-for-4th, and $250-for-5th. To be eligible, racers must be members in good standing with either USAC or BCRA. Points will be tallied using the USAC championship point schedule and ties will be broken by the October 24th qualifying times. If the October 24th show is cancelled, the prize money will be halved and awarded by the October 3rd points. Ties are broken by qualifying results. A special thanks goes to the West Coast Stock Car Hall of Fame, Ken Clapp, and everyone behind the scenes for their generous support. For more information on the West Coast Stock Car Hall of Fame, visit westcoaststockcarhalloffame.com.

Since October 6, 2012, the Sonoma-Marin Fairgrounds has hosted ten USAC Western States Midget races and five different drivers have claimed victory. Ronnie Gardner and Alex Schutte lead all drivers with three wins with Gardner, the five-time champion, setting the 1-lap track record of 14.200 on October 5, 2013. The series win list at Petaluma Speedway is at the end of this release.