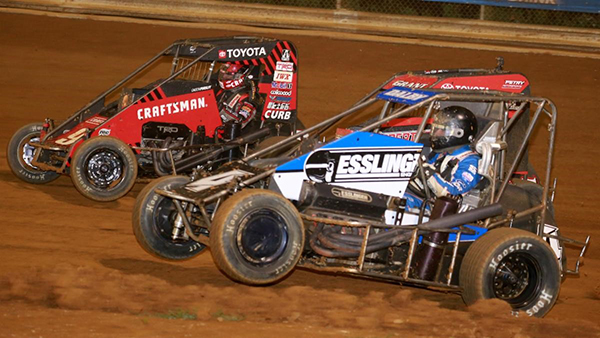 (September 15, 2020 from USAC PR) – A non-points special event for the USAC NOS Energy Drink National Midgets has been added to the schedule to close out the 2020 season at California’s Merced Speedway on Wednesday night, November 25. Photo by Ty Garl

The $3,000-to-win event marks the debut of the series at the quarter-mile, semi-banked dirt oval located in the San Joaquin Valley.  Under the USAC banner, USAC Western States Midgets have competed at Merced twice, both in 2019, with Austin Liggett and Robert Dalby each winning features.  Liggett also scored the victory in the AMSOIL USAC CRA Sprint Car debut later during the 2019 season.

The festivities will begin at Merced on Tuesday, November 24, with midget practice and micro sprint racing.  On Wednesday, a full midget event at Merced will be joined by winged 360 sprint cars.

While the pit area will be open, the grandstands will be closed for both nights at Merced on Nov. 24-25.

The Merced event arrives at the tail end of a busy stretch of USAC Midget racing out west.  With Merced only being able to host three events thus far in 2020, in addition to the cancellation of this year’s traditional Turkey Night Grand Prix at Ventura (Calif.) Raceway, Merced promoter Doug Lockwood is thrilled to bring the midgets out for another date on California soil.

The traditional pilgrimage takes the Midgets to Arizona Speedway in San Tan Valley, Ariz. for the Western World Championships on Friday and Saturday, Nov. 13-14, which will also feature the AMSOIL USAC CRA Sprint Cars in a midget/sprint doubleheader each night.

A mini-California Midget Week begins just days later with four nights of USAC NOS Energy Drink Midget National Championship racing in a five-day span, beginning at Bakersfield Speedway on Tuesday, Nov. 17.  Three-straight nights on Thursday, Friday and Saturday, Nov. 19-20-21, bring the series to Placerville Speedway for the second running of the Hangtown 100, which concludes the points season with a 100-lap finale.  Grandstand admission is not allowed at any of the Bakersfield or Placerville events, pit access only.

Further details on times and pit pass prices for the Merced events will be announced shortly.  The event can be watched LIVE on FloRacing at https://bit.ly/2Zs7zFP.