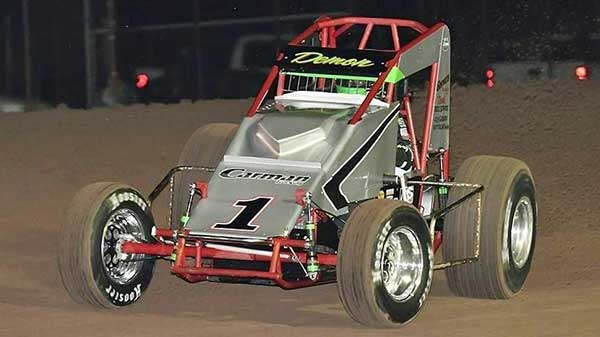 (November 12, 2020 from USAC PR) – Sprint Car racing has been a staple of the Western World Championships since the dawn of the event in 1968 with Bob Cleberg’s triumph at Manzanita Speedway. This weekend, Fri. & Sat., Nov. 13-14, the 53rd chapter of the event will be authored at the 1/3-mile Arizona Speedway in San Tan Valley. Photo by Ben Thrasher

Of those 43 previous visits by the series to the track, R.J. Johnson (Laveen, Ariz.) owns more victories than any other individual with 19. Johnson, a five-time USAC Southwest Sprint champion, has yet to score a Western World final night win in his career, but has won during the prelims of year’s past.

Chris Windom (Canton, Ill.) will be among those performing double-duty with both the USAC NOS Energy Drink National Midgets and the Sprint Cars at Western World and will wheel the Bill Michael #77m, who owns 39 career USAC Southwest Sprint Car wins as an owner, 14 of which have come at Arizona Speedway, all with R.J. Johnson as the pilot. The Michael team has already won twice this year with C.J. Leary as the driver in March in USAC CRA/Southwest competition at Canyon Speedway Park in Peoria, Ariz.

Damion Gardner will run the No. 1 at Western World in recognition of him being the reigning USAC CRA champion. In fact, the Concord, Calif. driver’s 83 points wins with the series, and eight titles, lead all drivers by a country mile. He won with USAC CRA at Arizona Speedway in 2018.

Reigning USAC Southwest Sprint champion and 2016 USAC West Coast Sprint Car titlist Brody Roa (Garden Grove, Calif.) has yet to win with USAC at Arizona Speedway, but he did record his bit of Western World glory by capturing the final night sprint car win at USA Raceway in Tucson, Ariz. in 2015. Arizonian Matt Rossi snagged a victory for the home crowd in 2014 during Western World at Canyon Speedway Park in Peoria, Ariz.

Western World marks the resumption of USAC CRA and Southwest Sprint competition for the first time since March when C.J. Leary won two-straight nights at Canyon. In February at Canyon, Jake Swanson performed likewise, sweeping both nights for himself.

Western World activities at Arizona Speedway begin this Thursday night, Nov. 12, with open practice for both sprint cars and midgets. Pits open at 3pm MT with on-track practice from 5-8pm. Adult pit passes are $30 while pit passes are $10 for kids age 7-12 and free for kids ages 6 and under. Thursday night’s practice will feature an extra treat with the Beaver Stripes Racer Appreciation BBQ dinner.

Both nights of the 53rd Western World Championships will be streamed live on FloRacing at https://bit.ly/2Zs7zFP.