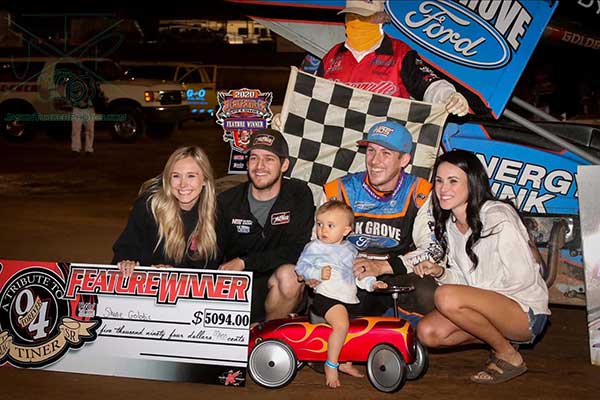 (October 4, 2020 from Gary Thomas) – Fremont’s Shane Golobic has won some big races in his career at Placerville Speedway and added another on Saturday by turning in a dominant drive to capture the $5,094 grand prize at the “Tribute to Mac Tiner.” Photo by Jason Tucker

Sharing victory lane with Golobic at the event were Dan Jinkerson with the Ltd. Late Models, Ryan Peter with the Pure Stocks and Hunter Kinney with the BCRA Midget Lites. When all was said and done a total of 95 race cars packed the Placerville pit area to help honor the late Mac Tiner Sr.

The final Winged 360 Sprint Car event of the season came to the line with Lincoln’s Blake Carrick and Fremont’s Shane Golobic sharing the front row. The duo battled for the top-spot with Golobic grabbing command, prior to a red flag period for Michael Ing, who emerged from his car okay. Just after that a dual flip between Kyle Hirst and Landon Hurst brought out another red. Fortunately both drivers also climbed out okay.

A long green flag run was then seen with Golobic holding a narrow advantage over Carrick, who tried his best to find a way by. That was until the two-time Trophy Cup champ found the bottom side of the speedway to his liking and began to check out from the field through lapped traffic. One final red flag waved when Kaleb Montgomery parked on the high-side of turn four and emerged from his car on fire. After a few tense moments the fire was put out and luckily Montgomery reported that he was okay after the race. A tip of the cap should also be given to Mike Henry who flung into action and helped assist the fire crew.

When going back green for the last time all eyes were on Roseville’s Colby Copeland, who put on a show rocketing around the Placerville cushion, going from fifth to second in just a handful of laps. By that point however, Golobic was gone and went on to take the checkered flag for his ninth career Winged 360 victory at the track, placing him in a tie for 18th with Steven Tiner and Joey Magaruh. Copeland’s strong drive from the 11th starting spot ended in second with Blake Carrick, J.J. Hickle and Tanner Carrick rounding out the top-five.

Completing the top-10 were Andy Forsberg, 16th starter Justyn Cox, Kalib Henry, Willie Croft and Ryan Robinson. The night’s B-main was captured by Chase Majdic, while the C-main went to CJ Humphreys. The five 10-lap heat races were claimed by J.J. Hickle, Shane Golobic, Tanner Carrick, Ryan Robinson and Kyle Hirst. Willie Croft began the night by setting fast time in the 58-car field with a time of 10.694 and went home with $694 for his efforts.

Tim Kaeding was the Hard Charger in the feature going from 24th to 14th and earned an extra $594.

The Ltd. Late Model main event was all about Diamond Springs racer Dan Jinkerson. The “Diamond Dynamite” blasted to the lead and held command every step of the way to earn his second career Ltd. Late Model victory at the Placerville Speedway. It was a nice way for Jinkerson to finish off his first campaign in the division with the Lightfoot Automotive team. It was a sweep of the top-two positions for the Lightfoot team, as Tom Tilford came home in the runner up spot. Matt Davis, Rod Oliver and Tyler Lightfoot completed the top-five. Dan Brown Jr. captured the lone heat race held during the night.

The final Pure Stock feature of the season saw Rio Linda’s Ryan Peter jump into the top-spot and feel pressure from Nick Baldwin over the early stages. The pair put on a show racing closely together until Peter began to gap the field aboard his No. 83 mount. Dan Jinkerson and Kevin Jinkerson were also making moves attempting to climb their way forward. At the checkered flag however, it was Peter picking up the big victory for his second career Pure Stock win at the Placerville Speedway. Baldwin, Dan Jinkerson, Kevin Jinkerson and Clarence Holbrook completed the top-five. Heat race triumphs went to Kevin Hess and Nick Baldwin.

The BCRA Midget Lites held their final Winged event of the season and saw a dominant drive by Citrus Heights racer Hunter Kinney, who distanced himself from the field and picked up his first win of the year at the track. Eric Greco brought home a solid second place finish, followed by a very fast Terry Bergstrom, Danika Jo Parker and Scott Kinney in the top-five. Aiden Lange, Craig Holsted, Brandon Leedy, Harley Aguilera and Cody Meyer completed the top-10. The Midget Lites return next without the wings and will also compete at the November running of the Hangtown 100.

The Placerville Speedway is right back at it next Saturday October 10th with a full night of traditional action during an event dubbed as “Prospector Pandemonium.” In competition will be the USAC West Coast Wingless 360 Sprint Cars, the USAC Western States/ BCRA Midgets and Wingless BCRA Midget Lites. Catch all the action via www.floracing.com