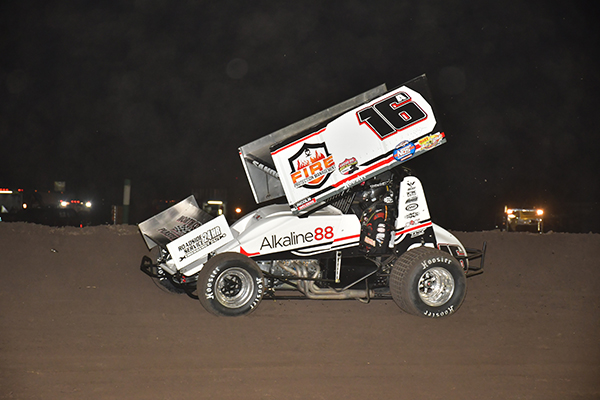 Sanders, driving Larry Antaya’s potent Alkaline 88 Water/Fire Protection Management sprint car, started the 25-lap affair on the outside of the front row and had to survive several caution periods on his way to his sixth series victory.

On the first attempt to get the show underway, polesitter Chase Johnson flipped wildly over the third turn embankment to bring out the red flag. Luckily, despite the carnage, he walked away unhurt. Two other caution flags in the first couple of laps slowed the action. However, on the ensuing restart, Sanders jumped out front and spent the first couple of laps fending off the repeated challenges of Rico Abreu. However, it didn’t take long before Sanders motored out to a healthy 10-car length advantage.

Blake Carrick brought out the second race stoppage of the race on lap seven when the 16-year-old jumped a rut in turn one and vaulted over the second corner. Carrick emerged from his damaged car unhurt.

Once the race restarted, Sanders essentially took no prisoners, mastered slower traffic and cruised to a $3000 payday.

“I felt I was all over the place at times,” said Sanders in victory lane, referring to the tough track surface. “But I knew Rico was back there so I wasn’t taking and chances. I got a little worried in lap traffic a couple of times, but this car was awesome all night long. A big thank you to Larry Antaya and the team for giving me a great race car.”

Austin McCarl, who survived a red flag heat race adventure of his own driving the Roth Motorsports KPC, Justyn Cox, 14th starter Matt Streeter, and Mark Barroso were the only other cars still running at the checkered.