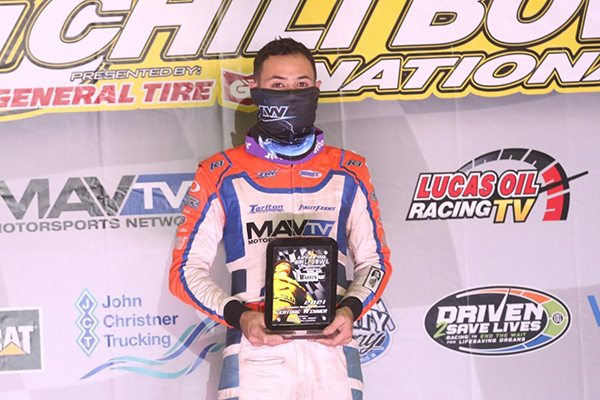 (January 13, 2020 from Bryan Hulbert) – Picking up his fourth Warren CAT Qualifying Night victory in as many years, Kyle Larson punched his ticket into Saturday’s championship A-Feature for the 10th time since 2010.

Larson’s seventh overall preliminary night victory, the MAVTV No. 01 trailed Thomas Meseraull on the start with the pair quickly going slide for slide for the lead until the caution came on Lap 4 when Jonathan Beason’s third-place run came to a close with a hard hit to the wall in the second turn.

Rolling the cushion on the restart, Meseraull was under fire immediately, with Larson not able to hold the spot. Regrouping and taking the lead on Lap 8, the point was short-lived as the RMS No. 7x went on the attack. Enter Shane Golobic to make it a three-car fight; the trio traded every line around the Tulsa Expo Raceway before the caution slowed action on Lap 10.

Keeping pace through several consecutive cautions, the leaders began shifting lower and lower, with the bottom becoming the dominant line throughout the field by the halfway point. Slowed as traffic came into play on Lap 16, Larson was now stalked by Shane Golobic with Meseraull in pursuit.

Coming back up on the back of the field with two laps to go, the pressure was on from Shane. Working to the white flag, the NOS Energy Drink No. 17w tried to keep on Larson’s back bumper as he put cars a lap down, but too much speed mounted the Matt Wood Racing entry on a slower car’s left rear tire.

Dealing with the caution again, the final restart saw T-Mez taking several shots at Larson, but it wasn’t enough as Kyle crossed 0.395-seconds ahead of Meseraull. Zach Daum ended up third from seventh, with Cole Bodine up five spots to fourth. Coming from 13th, Danny Stratton rounded out the top five.

Derek Hagar was sixth, with Chase Johnson making up 12 positions to grab seventh. Hank Davis eighth was pursued to the line by Daison Pursley, who was the night’s Hard Charger from 22nd. Frank Flud also made up ground with a run from 21st to tenth,

A field of 62 was on hand Tuesday night for a total of 119 entries on the week thus far.

The VIROC saw Christopher Bell trail early, only to blow the field away by 4.573-seconds. Cannon McIntosh, who led early, ended up second with Kyle Larson third on a last corner pass on Zach Daum and Justin Grant.

The World Wide Technology Raceway Flip Count made it to 23, with all drivers uninjured.