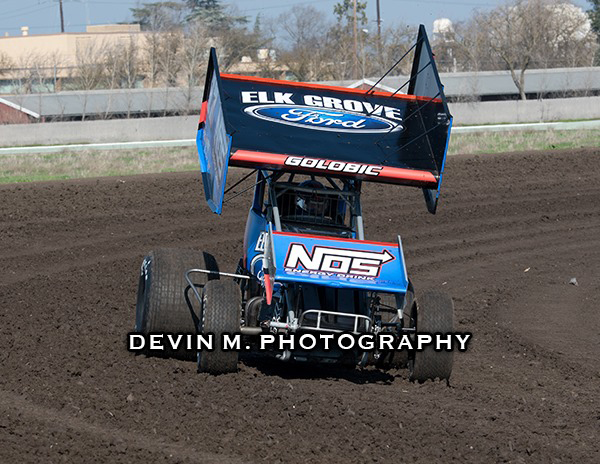 (March 19, 2021 from Jim Allen) – The high powered NARC King of the West Fujitsu General Series will kick off its highly anticipated 2021 sprint car campaign on Saturday, March 20th, with the Salute to LeRoy Van Conett at the Stockton Dirt Track. The event is in honor of legendary eight-time Northern Auto Racing Club champion LeRoy Van Conett. Photo by Devin Mayo

This marks the first of 20 scheduled championship racing events at 10 different dirt track venues this season. The traveling series and its loyal teams are attempting to return to some form of normalcy after getting sidetracked by the pandemic last year. Only four of the planned 19-events were run season and the Northern Auto Racing Club did not crown a champion for the first time in 61-years.

The sanctioning body is realistic on what is possible this season with the pandemic still looming strong in the background. A few setbacks and cancellations are expected, but a majority of the schedule is should run as scheduled.

“We are looking to get back to the business of dirt track racing and put on some entertaining shows for the fans,” said 13-time series champion and Series Board Member Brent Kaeding of Campbell. “It’s been a rough year for motorsports in California and everybody is anxious to get back to doing what they love the most. We should have a great show at Stockton on Saturday.”

All NARC King of the West races are are available on PPV at Floracing.com.

Hanford driver DJ Netto will be defending his 2019 series title this season and the competition is expected to be fierce. Several teams have already declared their intentions to make a championship run including Dominic Scelzi of Fresno; three-time series titlist Tim Kaeding of San Jose; 2018 champ Bud Kaeding of Campbell; Aromas driver Justin Sanders; Sean Becker of Roseville, the 2005 series champion; Roseville’s Willie Croft; Hanford’s Mitchell Faccinto; and Austin McCarl of Iowa. Collectively, this group has 148 NARC King of the West feature event victories to their credit.

The NARC King of the West Hoosier Tire format will include qualifying, three 8-lap heat races, a six-lap Sunnyvalley Bacon trophy dash, and the $3000 to win Fujitsu feature event headliner.

Pit gates will open at noon. Qualifying is set to get underway at 5:00 p.m., followed by racing at 6:00 p.m. Also on the racing card is Nor Cal Dwarf Cars.

Race fans and teams are required to wear mask and maintain social distance as much as possible to help reduce the spread of COVID-19.