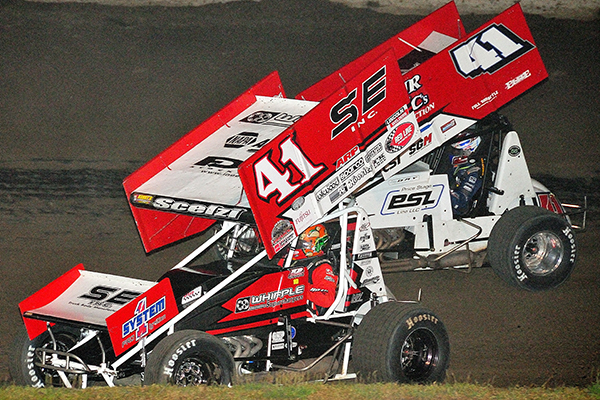 WATSONVILLE, CALIF. (July 9, 2021) – Dominic Scelzi slid past Ocean Sprints points leader Justin Sanders in lapped traffic with two laps to go on the way to Friday’s victory at Ocean Speedway in Watsonville. Friday’s race for the 360 Sprint Car series served as the prelude for next weekend’s 11th Howard Kaeding Classic, with Ocean Sprints on Friday night and NARC King of the West 410 Sprint Cars on Saturday night. Photo by Top Dawg Photos

“I really hope my dad’s watching. He’s been in the hospital all week. Dad I love you, this is for you,” Scelzi said. “There’s nobody better here than the 17 car (Sanders). Very thankful to hold off Justin. It feels really good to get by him late. That says a lot about our team.”

Sanders started outside of dash winner Nick Ringo of Morgan Hill for the start, swooping past him to lead lap one. Fast-time qualifier Joey Ancona of Concord fell from the top-five when he went off the edge of the speedway in turn two, allowing Clovis’ Corey Day to take the second position. The first red flag of the feature fell on lap 13 when Gilroy’s Kurt Nelson flipped from the tenth position in turn four.

Tucker Worth of Coalinga slowed in turn four for the next caution on lap 14. Hanford’s Grant Champlin tagged the backstretch wall on the restart, then slowed on the apron of turn three to require a caution. Scelzi worked inside of Day for second on the restart, nearly taking the position on the inside of turn four. A serious red flag stopped the action when 2019 champion J.J. Ringo flipped in turn one. Ringo slammed into tires at the edge of the speedway, turned on his side, and came to an abrupt stop. Ringo eventually walked from the vehicle after a lengthy delay.

Sanders picked the outside of Day for the restart with Scelzi finally passing Day for second. Bud Kaeding then took over third from Day in turn two on lap 22. Chris Nelson stopped in turn four for a caution on that same lap. Scelzi hounded Sanders in lapped traffic over the closing laps. The leaders went three-wide in traffic into turn one with two laps to go, with Scelzi using the bottom to take over the lead position at lap 29.

The leaders ran into turn one side-by-side with Sanders colliding with the lapped car of Jimmy Christian on the bottom side of the speedway. Christian spun to bring out a caution flag, requiring a one lap shootout to finish the race. Scelzi motored ahead for a one second advantage at the finish ahead of Sanders, Kaeding, Day, and Ancona.

Fred Ryland won his fourth IMCA Sport Modified feature of the season – and second consecutive – in a race with six cautions during the first seven laps of racing. The 20-lap feature settled down after that with Ryland taking the lead from Prunedale’s Max Baggett on lap three. Jarrod Mounce of Atwater went back-and-forth with 2020 champion Adriane Frost of Watsonville for second. Mounce pulled ahead with second place in hand while Frost battled hard with San Jose’s Randy Miller for third. Miller took over third coming to the finish with Frost finishing a narrow fourth over Dennis Simunovich of Hollister.

Tommy Velasquez III led all 20-laps of the South Bay Dwarf Cars. The lone caution fell on lap three when Eddy Claessen of Monterrey spun in turns one and two. Tommy Velasquez led Nick Velasquez, Travis Day of Concord, Eric Weisler of Campbell, and Claessen at the finish.