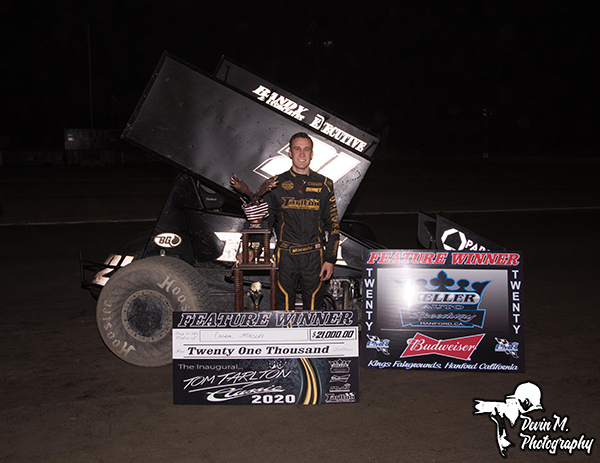 (November 1, 2020 from USAC report) – Leading all 25-laps, Carson Macedo (Lemoore, CA) swept the USAC Western States Midget portion of the “Inaugural Tom Tarlton Classic” at Hanford. He completed the sweep with an added $21,000 prize in the 410 Sprint Car feature in a lucrative night for the driver who ranks fifth in the World of Outlaws standings. Photo by Devin Mayo

Macedo began the night by setting the top mark in Woodland Auto Display Qualifying with a time of 16.238 over the 15-car roster. He won the 7-lap Extreme Mufflers Heat Race and the special Rod End Supply Dash that earned $600 for the veteran driver.

Macedo started the 410 Sprint Car feature from the pole position after winning the dash. He started alongside Fresno’s Dominic Scelzi on the front row for the 30-lap affair that paid $500 to each starter. Elk Grove’s Kyle Larson made a late bid for the victry from the eighth starting position but Macedo proved to be the top driver of the night. Macedo led Larson, Grass Valley’s Brad Sweet, Scelzi, and Daryn Pittman of Owasso, OK as the top-five finishers in the outstanding quality field. Ryan Robinson, Scelzi, and Sweet won the three heat races while 2020 All Star Circuit of Champions champion Aaron Reutzel of Clute, TX was the top qualifier. Fremont’s Shane Golobic won the B-Main event.